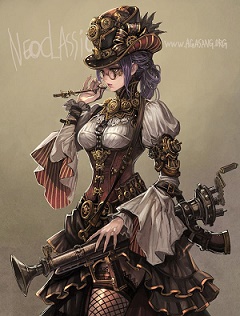 Biography :
The only engineer in ancient steampunk machinery.She accidentally learned the secret of the powerful machinery in an ancient ruins. Mechtessa's robot is one of her finest creation but she left it because she got better weapon on her side and she didn't even expect for someone to power up the robot. Enemy always dazzled by her beauty and her skills. She hate to admit that she is the daughter of Engineer,the old man who love rum. Rumor says that she still single and no man lives to tell the tales especially the one who knows her age.

Skill :
Increase Hero DMG by 200%(25% per level) and Hero will regenerate 1% of HP(1% per level) every 0.2 sec (Last 8 seconds) CD 9.5 seconds.During the buff, everytime the Hero attack will cause splash damage around the area dealing 20% (5% per level) DMG and slow Enemy ATK,ATK rate by 25%(5% per level) for 3 seconds. Hero will summon Steampunk Dragon(last 20 second) CD 22 second. Hero will deal 1.5x DMG every Hero crit and heal 30% of DMG dealt.Hero is immune to Energy Reduction,Stun,Fear and Silence. Hero has Lv 8 Berserk 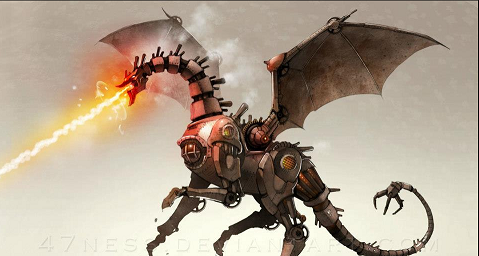 Steampunk Dragon:
Steampunk Dragon will taunt all enemy around him to attack him and deal 250%(Fixed) DMG around him and debuff and block Enemy from gaining energy or receive heal and destroy summoned troops(even Elusive troop).Steampunk limit DMG taken by 12000(-1100 every Hero Skill Lvl)(Last 8 seconds) CD 10 seconds.Every DMG that Hero receive will transfer to Steampunk.Steampunk has 4.0x Hero HP and 1.5 Hero ATK and ATK rate and has same Hero MOV SPD. Steampunk share buff,talent and crest (for example if Hero receive 15%+ DMG buff,Steampunk will also received it).DMG caused by Steampunk can't be negated nor blocked.Steampunk has Lv 8 Flame Guard and Stone Crest.
(That mean Hero is invulnerable as long as Steampunk lives)(Can't be debuffed)


Note:
If HERO hit Enemy that has flame guard,the damage reflection will go to Steampunk.


SORRY IF THERE'S A BAD ENGLISH.

I Dont know about the Hero and the Dragon, But the dragon for sure may be a Good Event Only Hero in Itself, If Igg Decides to Continue Dragon hero  for event only hero.

Not sure about the hero & her dragon. It may be a little too early in the powercreep to introduce this kind of a hero, because she sounds OOP. But I do like her, and the art certainly captures the imagination. English errors excused

Well, I can dream can I? I know there's no way IGG would take this suggestion. But they probably can take some skill.. Like taunting one can they?

Desiwarrior Rated on 8/25/17 11:12:29 AM
New Ideas and Sugeestions are Always Welcome. And you Never know,Sometimes IGG Do pick up ideas from forum members and impliment it ! Anubis was a Hero Idea given by a Forum Member and it was implimented also :)

This is too strong I guess?