What are the requirements for lava3. I've seen a lot of posts on it but I'd like a way to build a team with free to play accounts. Does dd tank gotta be double evolved? I noticed singe evolved gets hit hard.  I've had suggestions but they don't seem to help me get a successful run.  How many heroes need to hit other bosses? How fast should trash drop? Is Aries required? What buffers are required? Can you use 2 pD's without blitz scroll? Who needs double evolved?

The first thing to decide about Lava is which position you are shooting for.   The basics of lava group are different depending on that.   About the only common hero in all teams is PK.

Here is my guild's usual team layout (if browsing on PC, open image in another tab to enlarge) 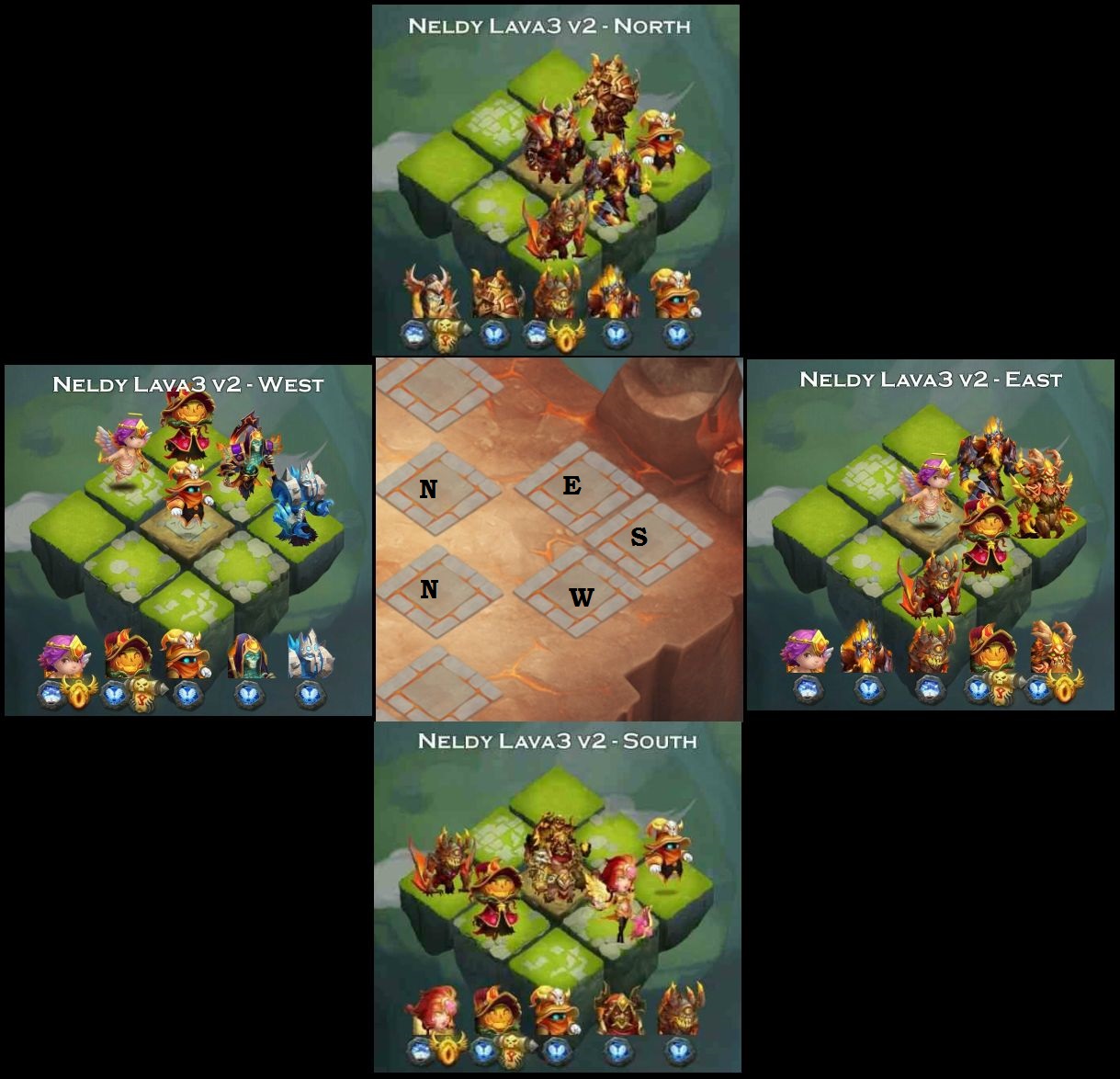 I don't have any Lava3 buddies so I play public all the time (on Android). I only roughly shoot for what Fe2O3 shows, just because it's impossible to get it just right. What I look for in general is
1) evo/Devo Tree
2) 1 or 2 ID and
3) 1 or 2 GS preferably evo/Devo and
4) All PD and PK included or at least 3 of each.
If there are 2 GS, you don't need to worry about any ID - even though he still helps a lot.

It takes some getting used to, because you have to tap on all the teams to make sure all these requirements are there before the session can start. But once you can do it fairly comfortably and all the above elements are present the success rate is very high.

we no longer run with PK or ID

better to run with Trixie instead of pk

Wicklund Rated on 9/14/17 3:21:12 PM
There are so many different ways to do lava, we actually run three different setups in our guild depending on who is in.

Signature
Think by yourself, dont be sheep

Ty for responding if anyone else wants to add your information is appreciated.

MissyBoo3 Rated on 9/16/17 5:13:06 PM
Generally, I tell anyone interested that minimum requirements are 9* single evolved with at least 7/10 skill. However, teams can get by with less if very strong teammates help them. Double evolve is not necessary if teams are setup well with heroes with right talents/crests. As has been mentioned, there are many ways to run. Just find one that works and your guild can easily repeat.

I rolled a gunslinger. Heard she's good at lava3.  Can she go in the tank's team?

DingfelderX Rated on 9/21/17 8:43:45 AM
Yes, she can go in any team. But she is no tank. She will instead substitute for one of the usual damage dealers, like reaper, spirit mage, or santa.

Opinion on bladeshell on my SK? I had rolled it awhile back threw bladeshell 5 on him.. Is that OK for lava3 tank?

scottbryant Rated on 9/20/17 7:51:29 AM
Bladeshell is a waste on sk, and is usually not good unless you have a while team of it because of the %chance. Our guild runs different setups than those above and run ice and tree together in the "south" position. We run a lot of dps and usually finish with over a minute left

There are many many ways to do Lava 3 these days, unlike before, when people were extremely specific and had to be because teams were much weaker then and we were all just learning how to do it so a system was needed.

Eventually it became multiple systems were needed, and many could use far more common heroes.  If you look in the guides section, there's one my old guild used from the start that requires neither arctica nor ice demon, and can use either valentinas or cupids ... and it doesn't need them 5/5 either.

If you're leading your group, then pick a sensible system.  If not, though, you'll have to conform to whatever your group(s)/guild does ... which may not match the heroes etc. you've been using.  It's best to do whatever they like even if it's not ideal, if you want to get quick and ready groups.

The set-ups are far too complicated to explain here, so I referred you to the guides section.  Each team is different, and all, etc etc.

One thing I would emphasize despite it becoming popular for people to say otherwise these days, is don't go in under-developed.  You'll ruin it not just for yourself but for others.  And it may be hard to get your credibility back once you've squandered it.  In other words, develop the living daylights out of your chosen team/position, and don't stop at "just good enough."  Don't stop till excellent if you want a good win percentage and don't want to be a burden on your teammates.  Because rest assured, it only takes one weak team to ruin it for everybody.

At least that's better than things were at the start, when it only took one weak hero!

Nice article kodi thanks for sharing.

Cichociemiak Rated on 2/15/19 3:26:53 AM
This "Nice Article" is long time outdated. There are much better heroes currently, and there are better ways to deal with L3. Btw. Don't bump 1.5 years old threads