★       Players must first build a (Guild Hall) before they can join a Guild or create a Guild.
★       Your Town Hall must reach a certain level to unlock the Guild feature. 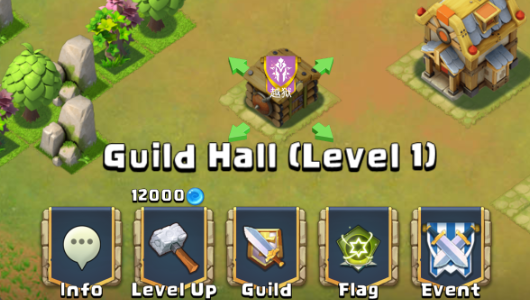 1.1 Guild Intro
★       Simply tap on the Guild button to enter the Guild interface, where you may choose to either join a Guild or create a Guild of your own. 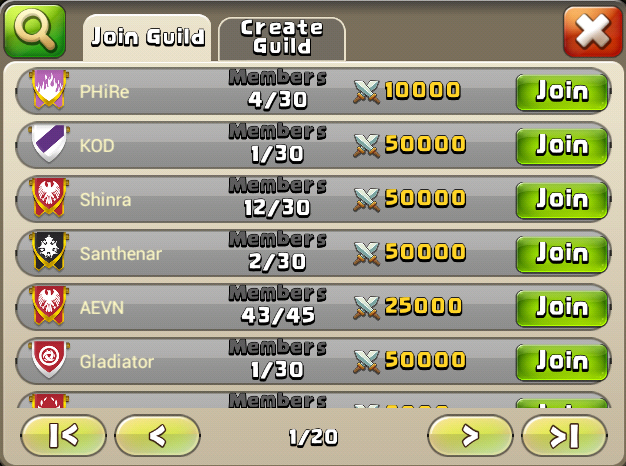 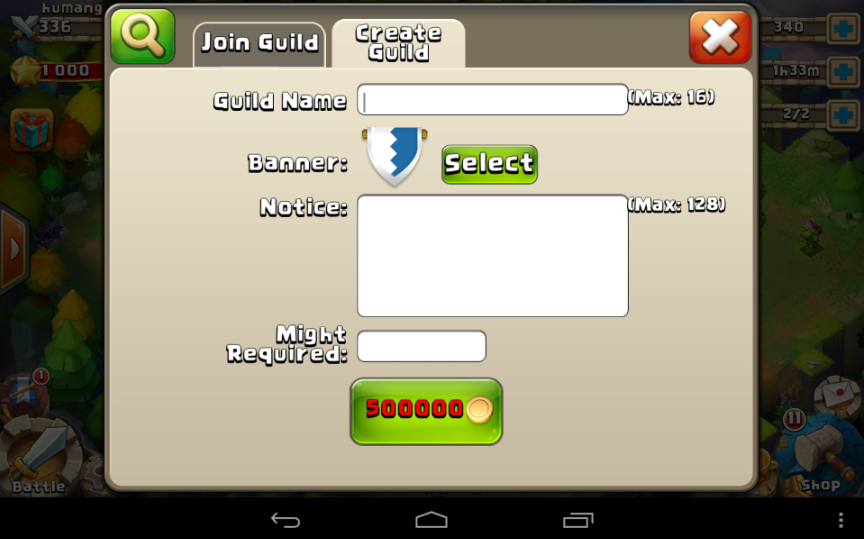 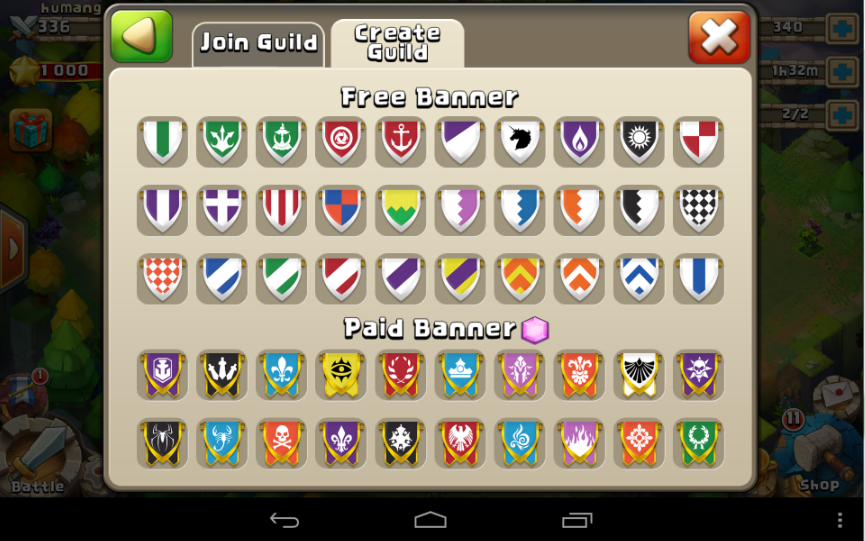 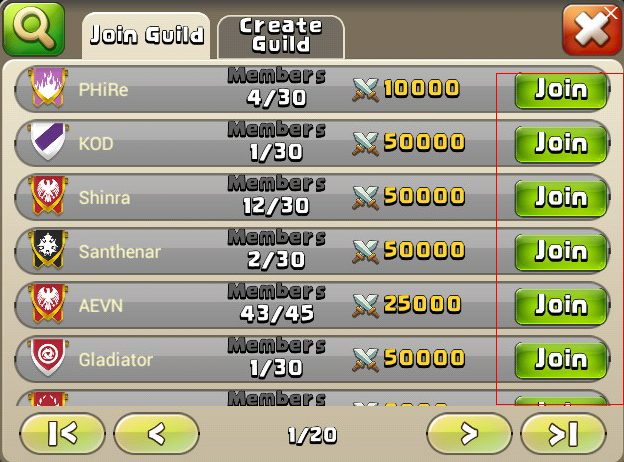 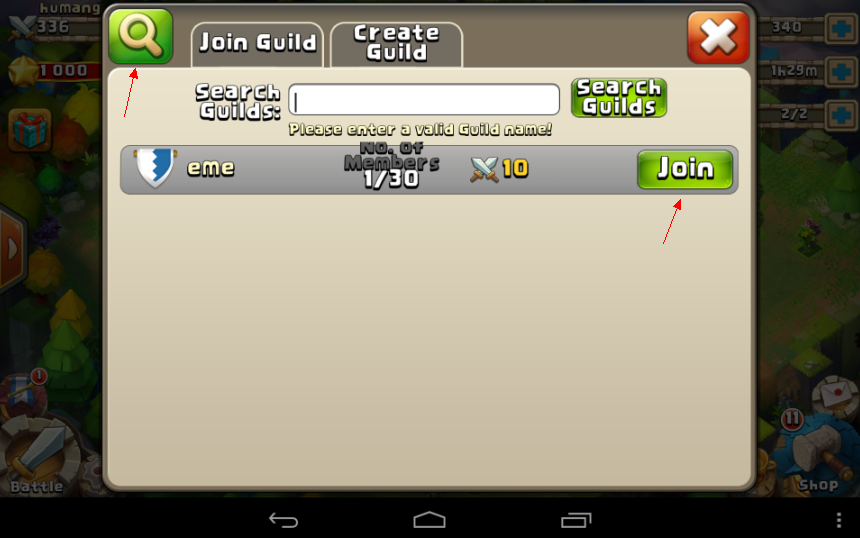 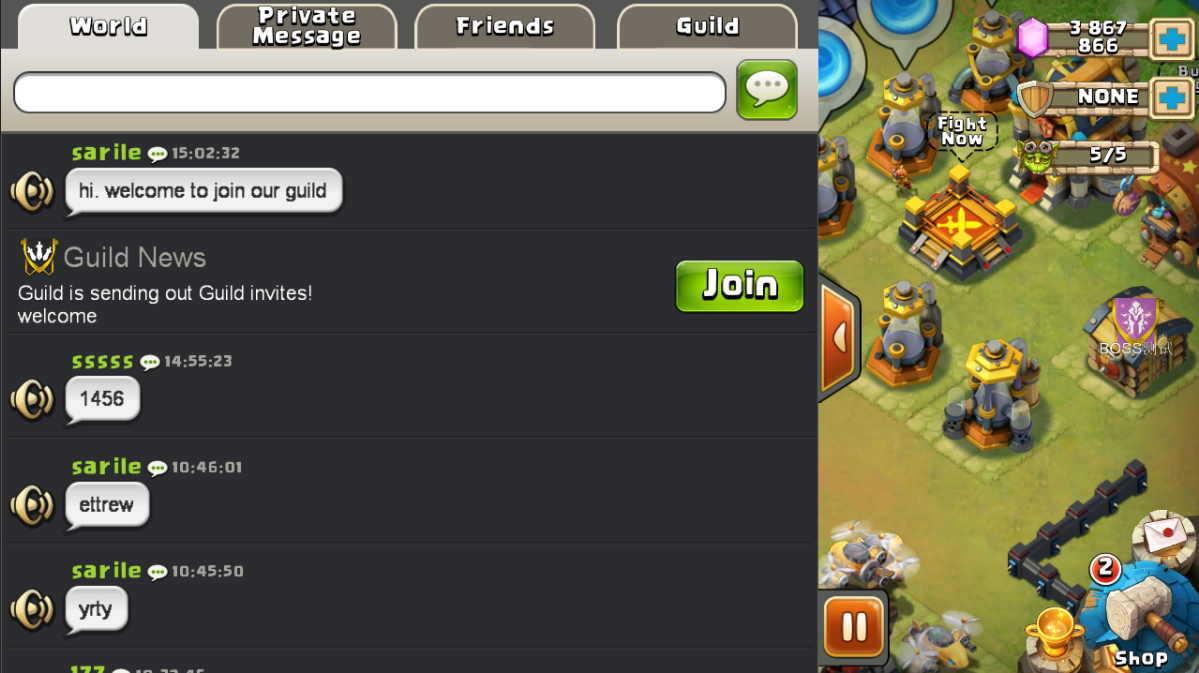 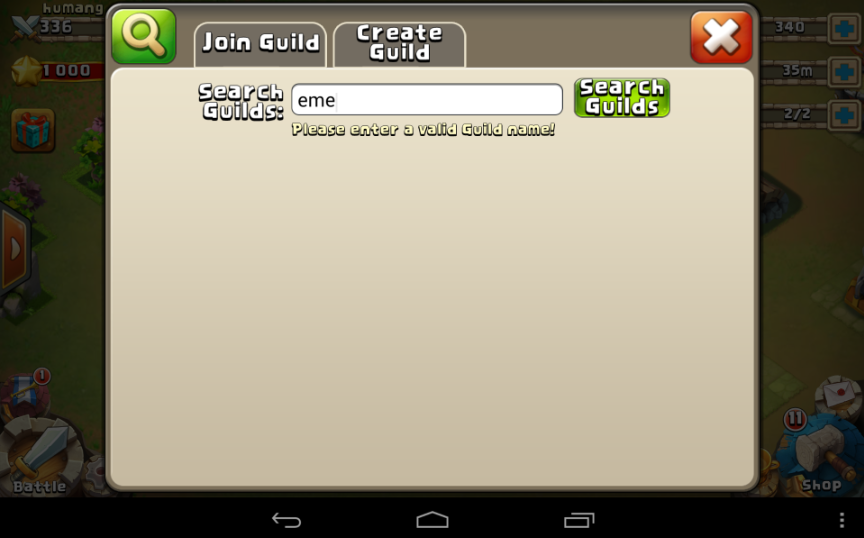 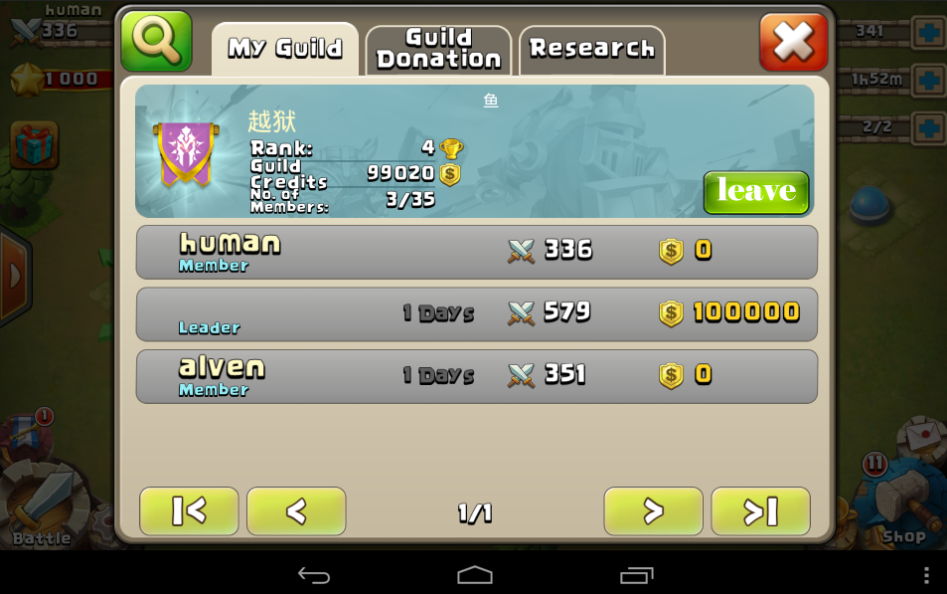 ★       Once you enter your own Guild, you will see the Guild notice, members list and other Guild related details.
★       Members will be able to see basic info about their guild as well as the member rankings.
1.   Basic Info: Guild Banner, Rankings, Credits, number of members, Notice (written by the Guild Leader)
2.   Guild Members: Member ranking (according to amount of donations), Might, number of days offline, donation amount
★       The Guild Leader and Elites have the authority to expel members (unable to expel members with the same guild status).
★       The Guild Leader can pass Guild leadership to one of the members.
★       After a guild member has left the guild, he will have to wait for 24 hours before he can join another guild. 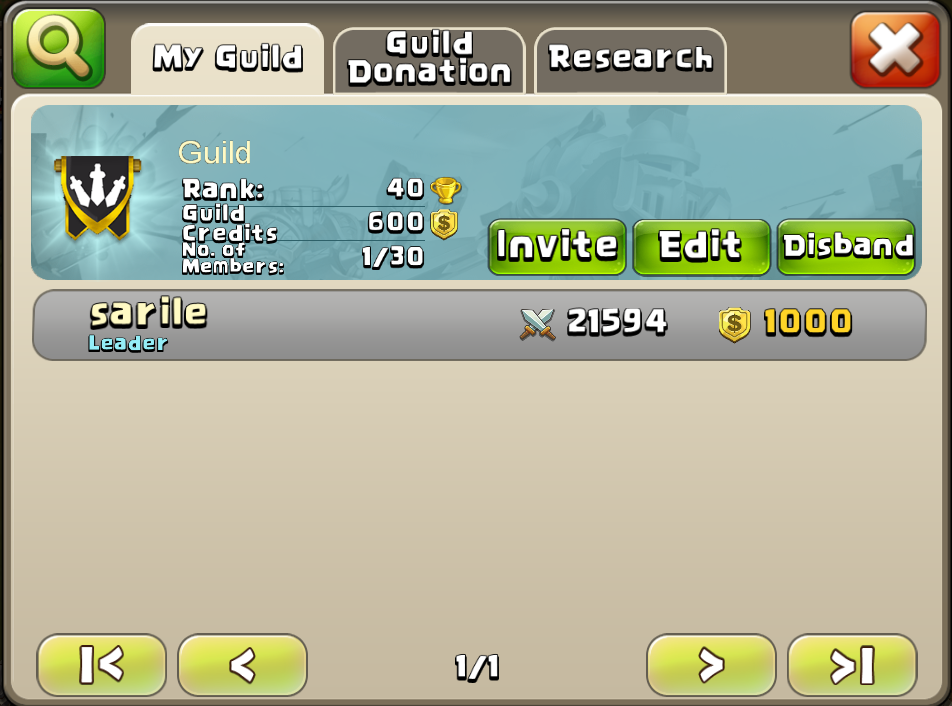 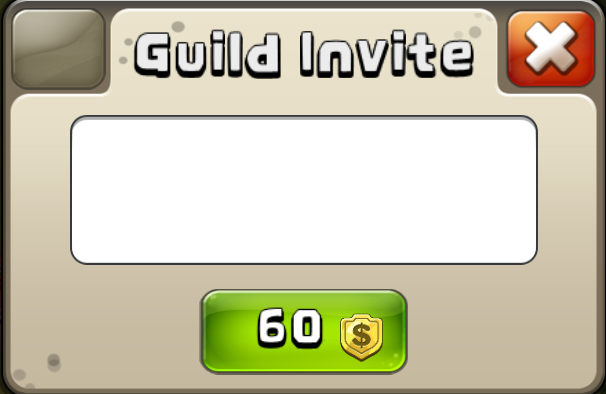 ★       The Guild invitation will be displayed on world chat and players may tap on the “Join” button to join the guild directly.
★       Players who are already members of a guild will not be able to join another guild.
★       If a player does not have enough Might to join the Guild, a message will be displayed when the player taps the “Join” button.
★       When the Guild is already full, there will be a message informing the player that he is unable to join. 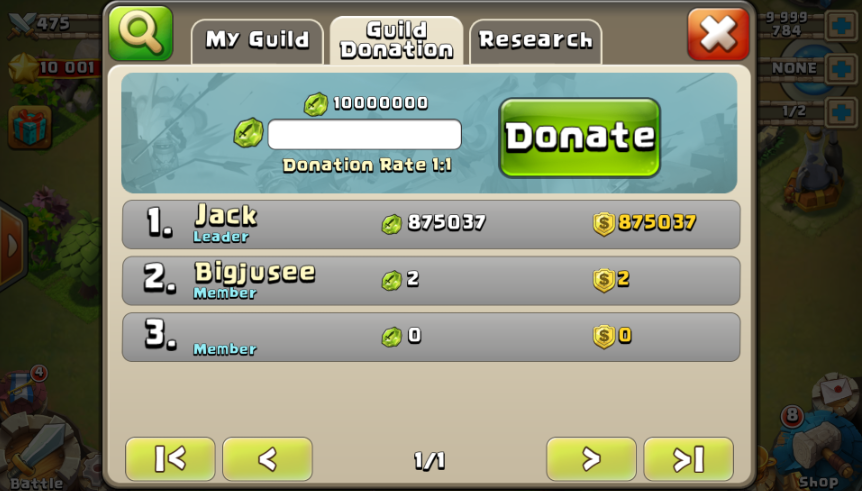 ★       Members can tap on the “Donate” button to make a donation. Donations increase Guild Credits.
1 Hero Shard = 1 Guild Credit
★       Guild Donation rankings are based on the a mount of Guild Credits obtained. 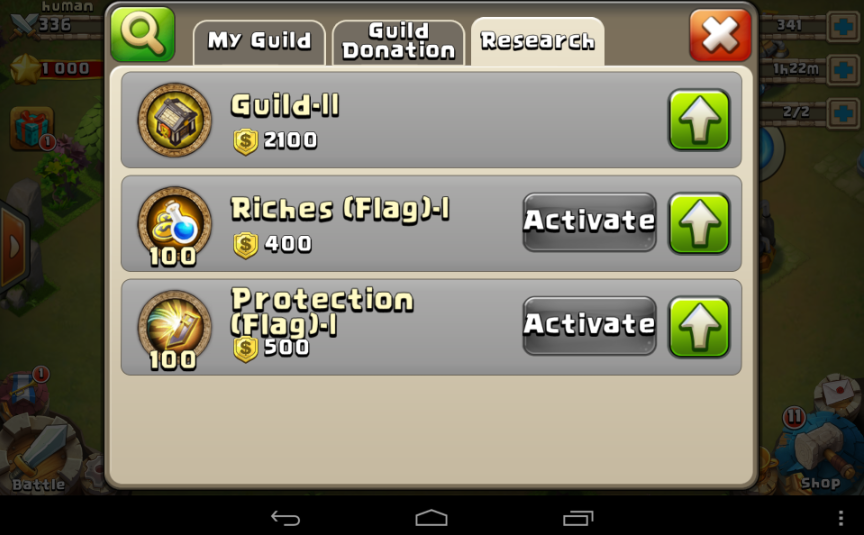 ★       Donated Guild Credits can be spent on Guild research.
1.   Guild Level: Raise Guild level to increase the Guild capacity and unlock other features (Guild levels up once requirements are met).
2.   Guild Flag: Gives benefits to members during a battle
★       Buy Guild Flags
1.   The Guild leader determines the amount of Flags available based on guild member demand.
2.   Each Guild can only purchase one type of Flag at a time. The number of Flags purchased is limited by the Guild Hall’s capacity (the higher the Guild Hall level, the higher the capacity).
3.   There will only be one type of Flag available for purchase at any onetime, and the Guild leader has to wait until all purchased Flags have been used before other Flags can be purchased.
4.   Tap on the Flag to level it up (similar to Unit Leveling). 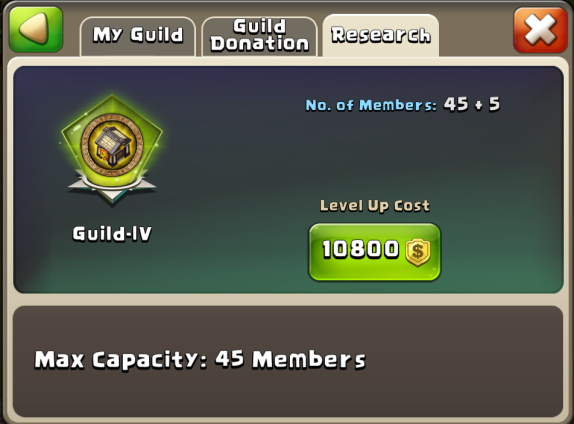 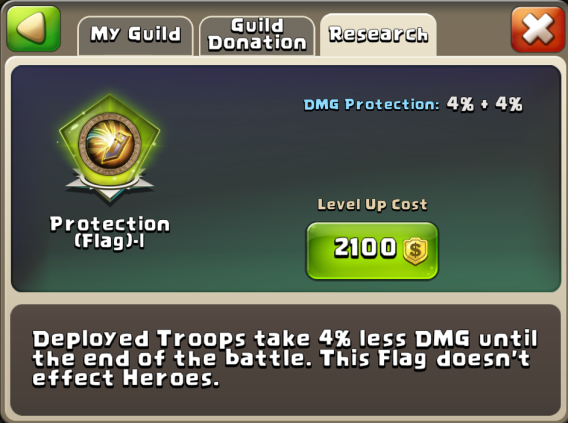 ★       Tap on the “Level Up” button to enter the buff-leveling interface. 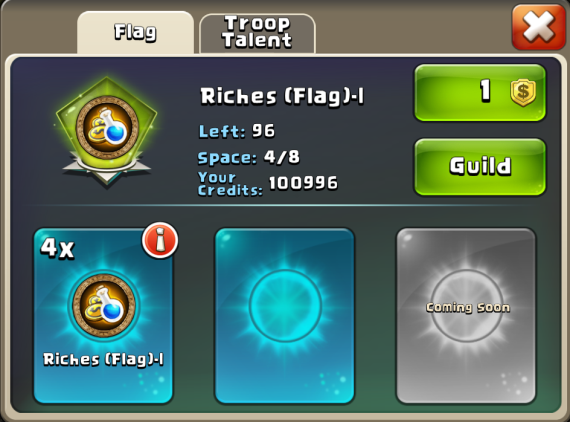 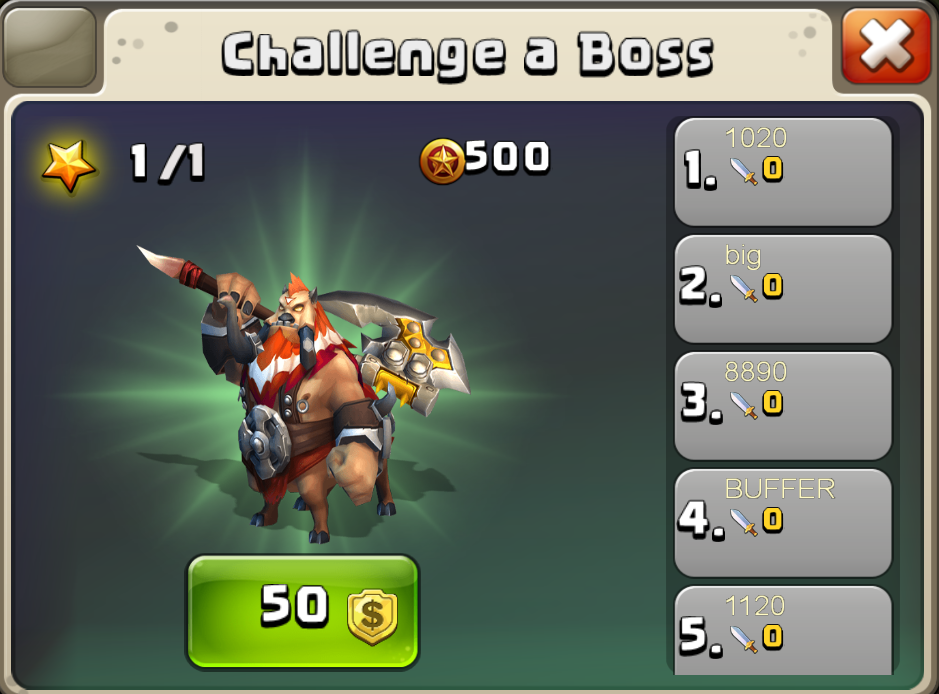 ★       The Guild Boss has to be activated by the Guild leader (can only be activated once per day), and it will remain activated for30 minutes only. You may enter repeatedly during this 30-minute period to fight the Boss.
★       There are four types of Guild Bosses (Gold, Mana, Honor, Shard) with corresponding rewards.
★       Once the Boss has been defeated, you can no longer attack it. Guild members will be ranked according to the damage dealt tothe Boss. The higher your rank, the better your rewards.  You can only use Heroes to attack the Boss. 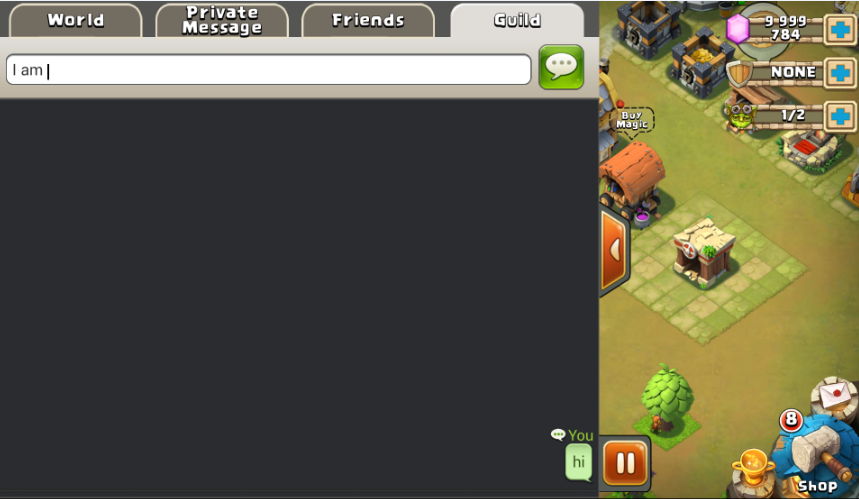 12-12-2013
3. A confirmation prompt will be added when a player requests to join a Guild.
4. Flags Credit costs now cost the same for all Guild members.
5. Reduced the opponent’s Health in the "Challenge a Boss" activity. Tier 2 and Tier 3 Bosses are coming soon.

1-2-2014
If the guild leader does not log in to the game for 7 consecutive days, a voting prompt will pop-up for 24 hours, allowing guild members to vote for a new leader.
Rate Delete Ratings
Manage

You forgot to mention guild cool downs, where if you leave a guild, you have to wait 24 hours before joining a new one. A CRITICAL PIECE OF INFORMATION.

EDIT: For those people who keep saying it is in the original post, you guys are dead wrong

The original post was edited to put that information in. It's funny how you guys forget about the edit function.

You forgot to mention guild cool downs, where if you leave a guild, you have to wait 24 hours before ...

And Guild leaders (or Elites) should confirm a join request, because in this state guild will fill up unwanted random players for a guild who is not public to anyone.

A visit (or attack?) button would be nice on guild roster, like in Battle report.

Thank you for your suggestion.

We will improve the guild function according to our dear players suggestion and realize them in future version.

i cant create a guild, i click on thd money 500000 but nothing happen, can anyone help me

hmmm the cooldown can u lower it