[Chat (Android)] Lost land is beyond broken and unbalanced

It this game mode is meant to be taken seriously something has to be done about these unkillable hero's like dove keeper... I just went up vs one and had 6 hero's attacking her and I was unable to kill her... 2 hero's have LVL 5 malice and gun slinger... All the reduce healing I could possible get and she still ranked my team for the entire time...

Only solution... Buy bloody Mary and ignore damage cap... Congrats to IGG you make another game mode that pushes the community away by simply making impossible modes unless you pay to beat them

Everytime a new game mode comes out we have someone complaining that it is unbeatable, and shortly thereafter there are all kinds of guides showing how easy it really is.  I can only suggest you keep trying on your own or you wait until someone else figures it out for you.

Zeph is worse, but not every tile has Zeph (or Dove).   But if you run into cases where both tiles you can pick has one... yeah, showstopper.

First lady the issue is the game has been plagued by this for a while now with unkillable hero's.
Like I said asside from a hero that ignores damage cap killing them isn't possible.

The simple fact comes down to the devs need to start figuring out how to avoid brick walls like this. A dove keeper or any hero for that matter shouldn't be able to tank a full team of 6 hero's for 1m20sec under any condition. Thats being brick walled by broken mechanics.
I agree there should be a challenge aspect to it but it shouldn't be a brick wall.
They basically stole this game mode from AFK arena and that game does it perfectly. It's hard sometimes but you can re arrange your team to beat it, this is just impossible no matter what you do

FirstLady Rated on 11/23/19 2:34:44 AM
Please read Teddu's post below, my point is that it is not supposed to be impossible, but what happens is with the release of every new feature we get the same complaints, but as illustrated below it always tends to be an over exaggeration.

-DocDenmark- Rated on 11/24/19 5:10:51 AM
You need to bring Ripper and Phobos with you, their silence can bring down Dove and Zeph in Lost Land, i had same problem with a Dove, but silence helped me! Go for it

Stealth+survival dove vs my 6- lava dove creation ronin Rosa and gs.
Here creation is very useful. Once his electric bolt stuck on dove..even invisibility couldn't help her to prevent dmg. Use malaise and try to put some dps and crit. I saved my pd specially for her alone but didn't require this time.
This is how I defeated her today in expert mode after losing in previous session by her at last stage last dragon last hero-Dove. So today I entered only for her.
She's really my favorite

but yeah rival dove hurts too 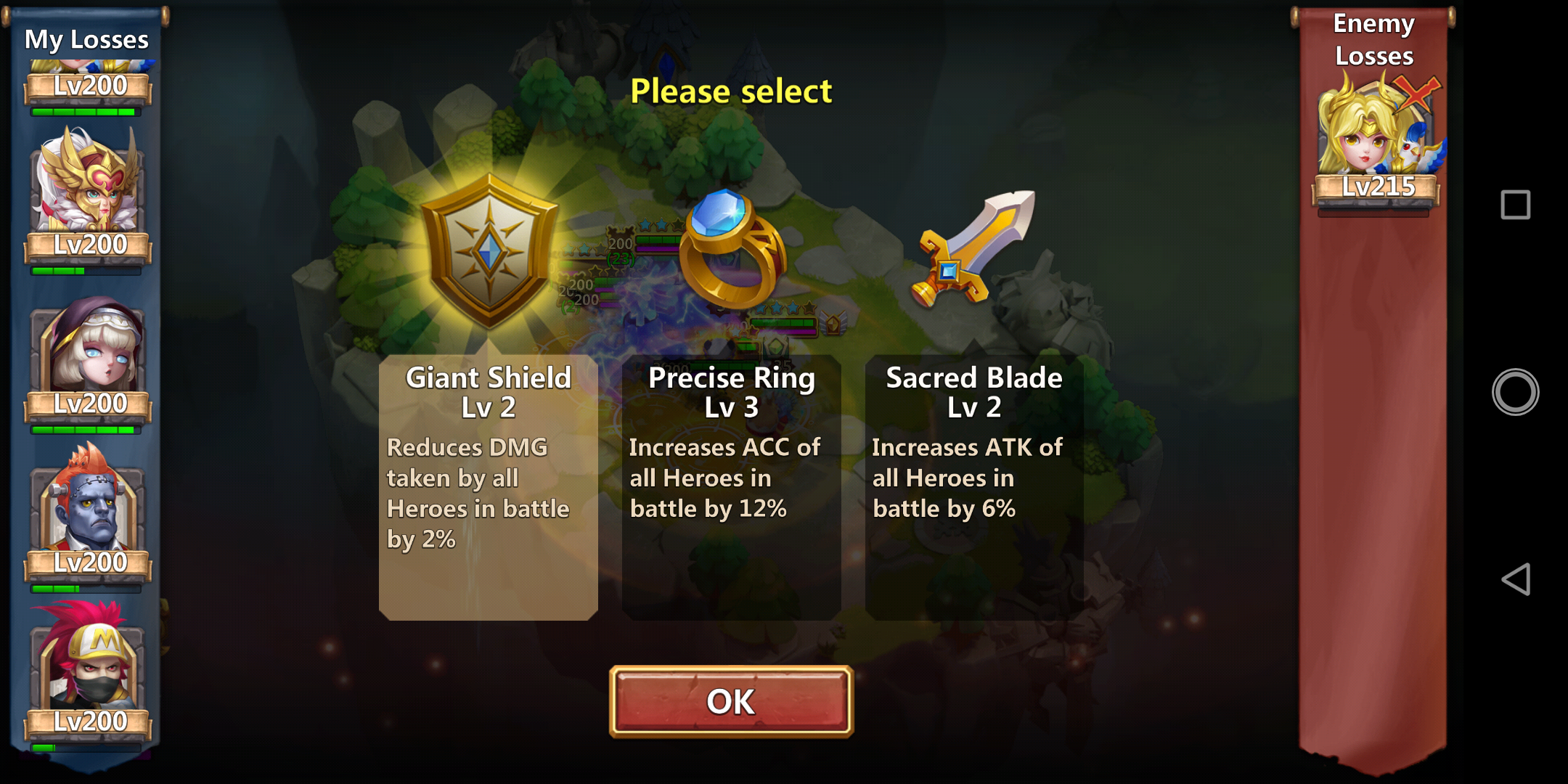 Shampz Rated on 11/22/19 3:50:49 PM
Excellent suggestion. Would you share a bit about your PD and Creation Build? I suppose leaving PD out until you get into a rematch and Dove is by herself?

Teddu Rated on 11/23/19 3:07:50 AM
@ shampz yes bro..I didn't put PD until I got her alone. I built my pd for her as the talent is usual empower and insigina survival with pyremage for extra dps. Creation has sl talent and Revite with malaise enchantment. I was even prepared to change all enchantment with malaise lol. @ Amazon I tried in previous session with Lazu and cosmo but they didn't help much..coz once she got invisible she would come back with full hp..no matter how much dmg you have given to her..and once she proc no lazu no cosmo left. So one need to hurry in finishing her.

Teddu Rated on 11/23/19 11:32:06 AM
@ Jimmy if you didn't met with stealth+survival Dove yet..then yes she wouldn't go elusive/invisible. But if she's so then she would be as I mentioned and then your revite lazu wouldn't help much.

@FirstLady I get it now, you don't play the game. Because if you did you would have known that "unkillable" heroes have been plaguing this game in multiple game modes for months now. Stealth + Survival + Dodge, Dove and Zephyrica are virtually impossible to kill for normal players. Same goes for certain Ronin specs. You need to drop hundreds of dollars for a Bloody Mary and completely rework your team to maybe stand a chance.

Check out this video from Medvedev https://www.youtube.com/watch?v=z6c2LOyddgE He is the highest might player in the world and he can't kill that Zephyrica on Normal Mode with a Bloody Mary and with a fully maxed out BT 30 teams of the best heroes. How is a normal player supposed to? We aren't even talking about the Advanced and Hell modes. This is supposed to be Normal mode.

I'm really disappointed in you. You are snuffing out constructive criticism that would make the game better without any knowledge of the current situation in the game. Why is anyone supposed to take you seriously?

Judicious-Fire Rated on 11/23/19 6:15:28 AM
Maybe try using Pumpkin Duke against Zeph and Dove in LostLand? The ATK speed boost can make quite a difference. JF - who was downgraded to 2nd highest might somehow.

FirstLady Rated on 11/25/19 1:42:39 PM
@Lucc23, I do play the game, and you don't have to take me seriously. However as previously stated not a new mode is released which does not bring someone complaining because they can't overcome it. They cried when Lava 3 was released and it was not long before standard team compositions were being published and improved upon. Teddu maybe a big P2P player but he obviously found a way around it, and I dare say some industrious F2P or P2P will be publishing methods to accomplish this with F2P heroes shortly. So instead of putting out false information about what others can or can not accomplish, how about reading the post and utilizing whatever tips you find among the posts. Create further discussion topics to perhaps pic up more and when you have finally figured out how to overcome this obstacle come back and share with others. After all that is how most of the diehard players have progressed from day one.

@FirstLady have you actually faced a Stealth Zephyrica team in Lostland? Because if you did so on a f2p you'd know it is impossible and we wouldn't have this pointless discussion.

This is the team you have to face on the last tile of Lostland as a f2p in Normal Mode. You can not avoid this team.

I have actually tried it and I actually know what I'm talking about. Even BT 30 heroes are dead after a second. How long do you expect a f2p team to survive? Use a PD? He is dead b4 he can stack his buff. Use Flame guard? You heroes are dead b4 the Zeph feels a scratch.

FirstLady Rated on 11/25/19 4:34:06 PM
Again with your random facts that you pull from the air. The teams like every other game mode are random, so for you to make a comment like "you can not avoid this team" is a blatant lie, since there is NO formal designation as to what teams are on what tiles. If you want to make a point you should do so with real facts and not the stuff you are pulling from where ever for "dramatic effect" because it limits any credibility anything you say may have. Now again you have a few options...(1) You can continue to cry because you can't beat the team. (2) You can try and collaborate with others to beat the team. (3) You can immediately change your status from F2P to P2W since that seems to be the most important element to you...winning.

FirstLady Rated on 11/25/19 4:37:08 PM
And FYI: tagging (@FirstLady) does not send notifications to the party being tagged. Posting in their threads or on their posts does.

Anyone pass the insane mode?

Ezodan Rated on 12/10/19 8:14:46 AM
Prevous round yes now I’m in the second mode at the end and it’s an unkillable Zeph with Stealth+ something and max destiny, unkillable only my dove and Zeph survive it. I don’t have bt30 ripper and creation yet but seeing how fast my other bt30 heroes died idk how ai can win, and this time it has Bloody Mary Stones :(