So I've been testing builds on my hero s and just recently thought it would be good to make a full survival team and when I tested it my hero s (lazu, walla, asura, anubis, dove, and occult)with survival they worked so well and literally would not die against hero s like dove keeper, lava and zeph. So I'm just curious if anyone else runs a full survival team or am I just completely out of my mind for doing that?

Signature
Happy Clashing Everyone!
Might: 660K
CC Name: MineCon12
Guild: TRENCH
R.I.P, Ive converted to the dark side. May all you remaining f2p have the same luck I did when I was f2p!

Based on your findings you definitely are not out of your mind.  The reality is that there are some popular builds for most of the heroes, but those are not the only ones that work.  If it works for you run with it and set a new tend.  Survival is a pretty popular talent, can I ask what you are pairing it with?

Shadygamersan Rated on 12/23/19 12:16:11 PM
On dove have bd, on Walla I have silent cover(I have fg on him as a reserve talent but don't have the materials to lvl it up), asura I have vb, anubis I have sl, lazu I have revive, and occult I have fg.

FirstLady Rated on 12/23/19 6:59:54 PM
@JIMMY_BEAN, Obviously you like spam posting as I don't see anyone asking you about Anubis or your personal opinion on this post. My question was to Shadygamersan and him alone. So this amounts to nothing more than a trolling spam post and I would caution you to stop.

Shadygamersan Rated on 12/23/19 10:45:45 PM
I agree with first lady and just a heads up bf on nub is trash. He's made to debuff enemy heros and to survive and all bf does is increase his attack and crit damage therefore not helping him in what he naturally does but instead trying to make him do something entirely different

First of all, kudos to you for being brave enough to test new builds. Not many try to do this..so good on you bro.

Secondly, your Survival build seems "good" but needs rigorous testing before you decide to settle with it. I know for a while I preferred a Revive + Survival Ripper cause of his high dodge, & it worked great in defense, but sucks in almost every other game mode.

Heroes like Ripper, Occult, Walla, have very weak HP so they can easily be killed against strong atk builds. I've found, for these since they are also great support Heroes, stacking dmg reductions helps them to tank and live longer to support the rest of the team.

Tanks, like Dove, Lava & Zeph with dmg caps are capable of GREAT dmg ouputs, at very lil risk to their health. Im a firm believer that when choosing builds, one should do their best to boost the best qualities of the Hero they are building. Eg. Dove Keeper, with the right build, can proc with a crit dmg exceeding 3million! (This is insane dmg!) Zeph is similar too...with a strong atk build.

Creating a full Survival team may assist your team to "survive" a few attacks, & survive in some game modes at intermediate levels, but the tougher the competition, the more you begin to appreciate being able to dodge and reduce dmg received without a cooldown.

Survival basically has a 4sec cooldown. Lol. Thats alot of time to get dead

All that being said, in alot of PvP modes, an SL + Surv Laz at very high bt, tanks for days !! Lol

Shadygamersan Rated on 12/23/19 10:41:54 PM
Okay wow thank you for that information. I didn't even think about the fact that if I don't give a lol hp hero like occult or Walla some type of damage reduction then the possibility of them getting one shot or just straight out overpowered would be a lot lower than a surv build lol I feel kinda stupid for not realizing that. So the next time I roll sacred light I'm gonna put it on both of them. I also very much agree with your statement on building heros to where it increases what they already do to make them do it better and just like in your ex. Or dove I can personally say that bd and up releases her full potential cause she not only already does insane attack damage with up but when ever.she dodges she increases that by 150%

I love survival on heroes like dove and zeph, but....  if you run into malaise team, you are dead.  But would be good to try as a team, just know with wrong matchup you get screwed

Here's
tQ¡© is a pic of my dove doing 3 mil damage as you stated. When she's made correctly she does amazing 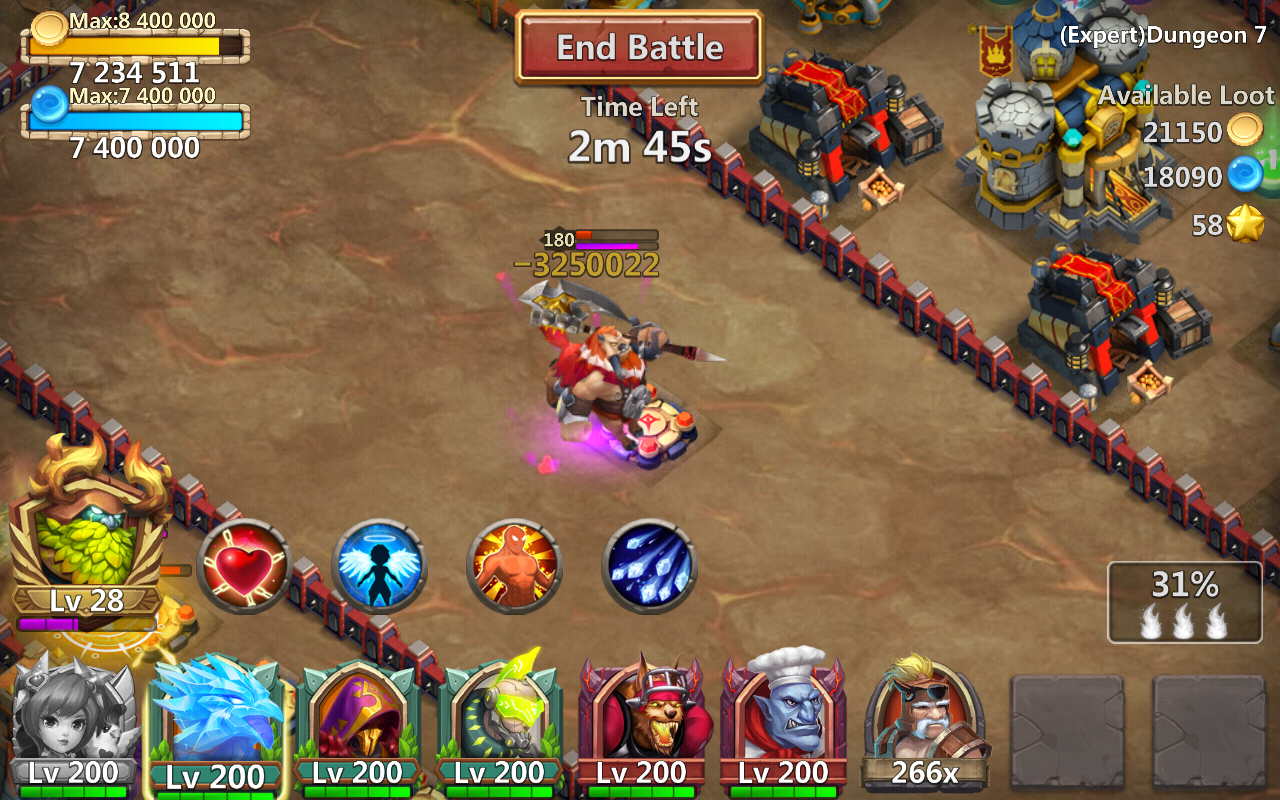 Signature
Happy Clashing Everyone!
Might: 660K
CC Name: MineCon12
Guild: TRENCH
R.I.P, Ive converted to the dark side. May all you remaining f2p have the same luck I did when I was f2p!
Return to thread list