Every update just makes me hate this game more, igg cant understand what too much too fast, not making another purchase thanks to igg.
Check out this new annoyance THAT DOES NOT EVER GO AWAY. This is the kind of annoyance that makes me want to uninstall this incredibly stupid game. 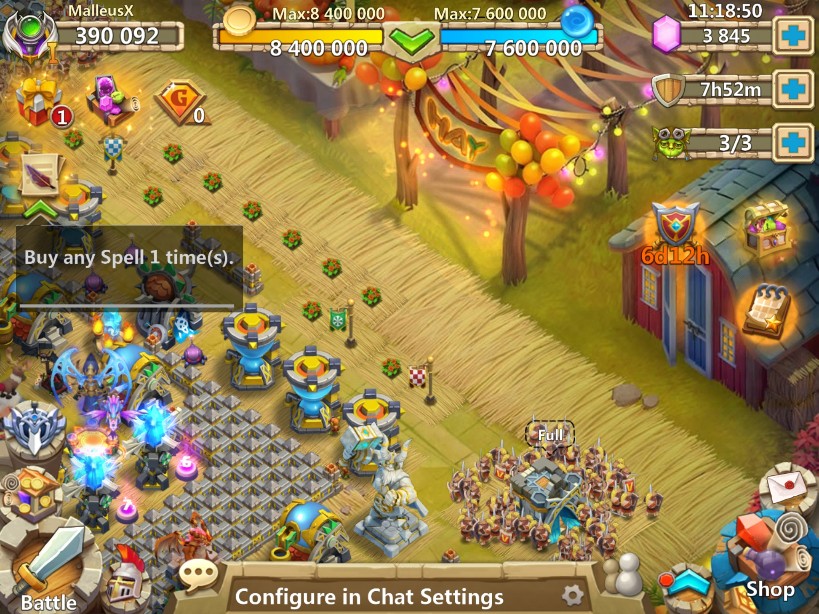 "Every update just makes me hate this game more"
And yet you're still here playing and clashing like the rest of us...

Personally I like how they added more tasks for us to complete and
get more "free" rewards ( GJ IGG ), and instead of praising them ,
you're here just to complain and point out how they've screwed up
while at the same time providing no solutions whatsoever !

Maybe just maybe, it would be better to make a "suggestion" thread instead of whatever this is.

Cichociemiak Rated on 1/7/21 12:37:12 PM
I know someone else who was saying similar think about not liking game even more with every update, and that person is still here. Not like i am criticizing OP at all. Just it is little weird that some games can annoy folks to point when they want to quit and complain, but they are not doing it. And looks like CC is one of those games.

DragonSl2 Rated on 1/7/21 3:10:29 PM
Yeah true, I guess good old curiosity is the main reason ppl stick around and play for so long, despite how annoying some changes might be.

FirstLady Rated on 1/7/21 7:31:23 PM
Well said, but I think the reason we see this so much is because psychology 101 is as basic a class as one can take. Unfortunately it leaves them believing that if they use it things will actually work out in their favor.....Silly!!! Right?!?

I have reported it right away, cause indeed it is annoying. And more folks will complain, faster it will be fixed.

But on other hand ppl are still playing it cause they like it. Not everyone, cause, like in Your situation it is not fun any more, but game is still alive, and this is best proof that devs know what they are doing.....mostly

But it would require complete change of attitude to release game without any bugs, cause they would have to test it in first place, and during those tests folks would be getting impatient, and it would be even worse.
I am not telling i like to be beta tester, but on other hand i don't mind current way game is going (except few things like update during GW for example). We will see where it will go.

Cichociemiak Rated on 1/7/21 3:39:06 PM
I am F2P, i don't have worries like those at all. Without those kind of thoughts you don't have to worry about "I payed too much" and you can focus on having fun.....as long as you are not bothered by getting beaten many times in PvP modes.

FirstLady Rated on 1/8/21 3:04:10 AM
@PotatoWedges, The most disappointing feature about the game is members posting how bad the game is on their message board, I mean if it is that bad then why waste your time. Those of us who are content or at least still enjoying the game enough to not be entertaining thoughts like that really don't want to hear it.

kayjayzed Rated on 1/13/21 2:42:25 PM
@FirstLady totally cant agree what you said. A good forum/discussion board should allow positive and negative feedback as long as comment is not offensive. Like PotatoWedges said, these comments can help the game developers reflecting themselves. If you still believe you are right, let me tell you.....why waster your time leaving comment here if you think this kind of post is annoying or disappointing,

I personally agree with your point of view. I believe that all of these updates, especially the most recent one, are completely focused on forcing you to spend money. If you don't plan on spending, then the update for you just removed rambard's usability and made it so that your team is now dying a lot faster. Their updates are completely p2p oriented, which can I understand why, but the reason why they have servers dying is because there is no competition in them anymore. Top guilds will get stronger because they are willing to spend absurd amounts on a game while those who want to play the game for its intended purpose: to play, will be left in the mud. A large proportion of Castle Clash users are f2p, and yet it seems like IGG is just ignoring them with these p2p updates every month. I get that they need to keep them playing and spending more money, but think of the game in the long run, not just the money that they get right now. Sooner or later, all of the f2p accounts will quit, leaving the p2p accounts bored out of their mind because they have no one worth fighting anymore. They are slowly killing their own game. Others may disagree and that's perfectly fine, but it's all I see with these new updates.