[Chat (Android)] IT IS NEVER OKAY TO NERF 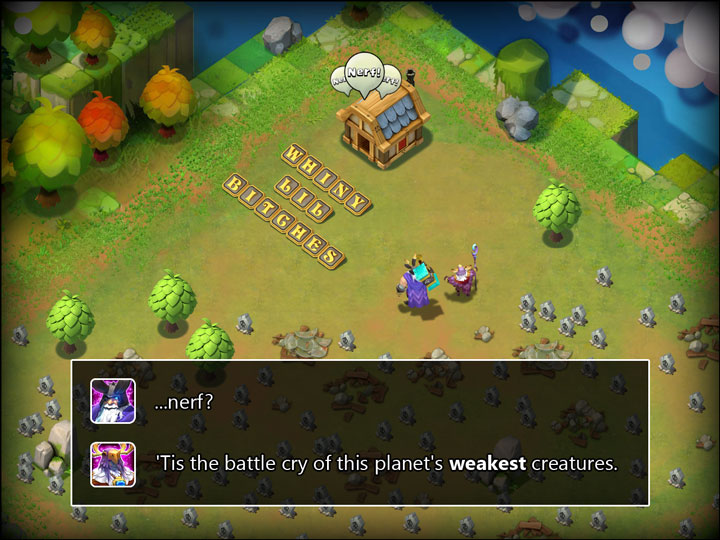 This is an open letter to all Castle Clash players and developers who support nerfing.

It is never okay to nerf. When I say "nerf", I'm talking about when the developers intentionally change (usually weaken) the attributes of a particular character or feature, in order to keep the game "balanced". Specifically, I'm talking about cases where these adjustments are made after the original attributes have already been "in the wild" for a significant period of time (e.g., more than a week?). There is a huge difference between "balanced" and "fair", and if Castle Clash can only be one of these, it has to be fair.

When a new character or feature is introduced to Castle Clash, it changes the game for everyone equally. That is, all players are given an equal opportunity to adjust their game strategy accordingly. A new hero might be over-powered or under-powered, but in the beginning no one has that hero yet, so it shifts the playing field for everyone. Everyone has the same chances of receiving that hero from the alter, and everyone who gets it starts at level 1. It might be random, but it's definitely fair.

If a particular outcome is "unbalanced", developers can restore the balance...but they should strive to do so in a manner that is fair. Nerfing an established character is not fair, no matter how well it balances out the game. It basically punishes this group of players:

...and rewards this group of players:

That doesn't create fairness--that creates pointlessness. There's no point in playing a game where the rules change every time you start winning. What would happen at the World Series of Poker if halfway through the tournament, all the short-stacked players convinced the casino to make $1,000 chips worth only $1? Well...that would certainly "balance the game", but so what? Not only would the whole game be pointless, but winning the tournament would be meaningless.

So, every time the topic of "nerfing" comes up, remember the following...

Developers:  When you nerf an established hero--or make any significant changes that sacrifice fairness for balance--you are basically hurting the integrity of Castle Clash just like you would be if you allowed hackers to win. The end result is the same: there's no point in playing. If you release a hero that's over-powered, release another hero that balances it out. Every time you nerf a character, you're destroying a huge amount of time and resources that your customers have already dedicated to that hero because they trusted you to (1) test your code BEFORE releasing it, and (2) to stand by your decisions afterward. Selling us lemons is forgivable; taking them back after we've made lemonade is reprehensible.

Players:  When you complain about a character being over-powered and suggest that IGG developers make it weaker, you are no longer just a loser in Castle Clash--you're now a loser in life too. Play the hand you were dealt, get a better hand, or shut up and lose with dignity. At this table, Aces are high and no one cares about you Queens.
Rate Delete Ratings
Manage

I would much rather this approach be taken than my suggestion of nerfing the rest of the OPs. But we all know they wont change it back.

I'm just going to say it's tough on the developer's end. Even if they have play tested a character, they are usually testing for a bunch of other things besides just making sure it is a balanced character. They have to make sure it works properly, its skills deploy properly, the graphics run smoothly and at the right time. They also try to consider making the characters balanced, but there are times that players are able to use them that the developers never considered before, and then it could completely ruin the gaming experience. And sometimes, these loopholes aren't discovered within just a week of game play.

For example, I think this whole smurf system is not the way the game should be played. It exploits the system of the game, and it is technically one way to play the game without cheating. But it's not like smurfs just popped up a week within the game being played. It took a couple of smart players to understand the system, and then they passed the knowledge to those that would use it to their advantage. And I also don't think the developers thought of their game being played this way either.

The way I see it, when they nerf a character, it is because they have come to a realization they have screwed up somewhere, and they have to do something to fix it for the future of their product.

Thank you for your constructive criticism. I have updated the post to include a picture version, so that you--and others like you--can understand the message.
Rate Delete Ratings
Comment
Submitting…