The all-new arena - Lost Battlefield - is here! Showcase your wits and strength in this special game mode and become the champion of the Lost Battlefield! The following is a simple introduction to this epic new war zone. 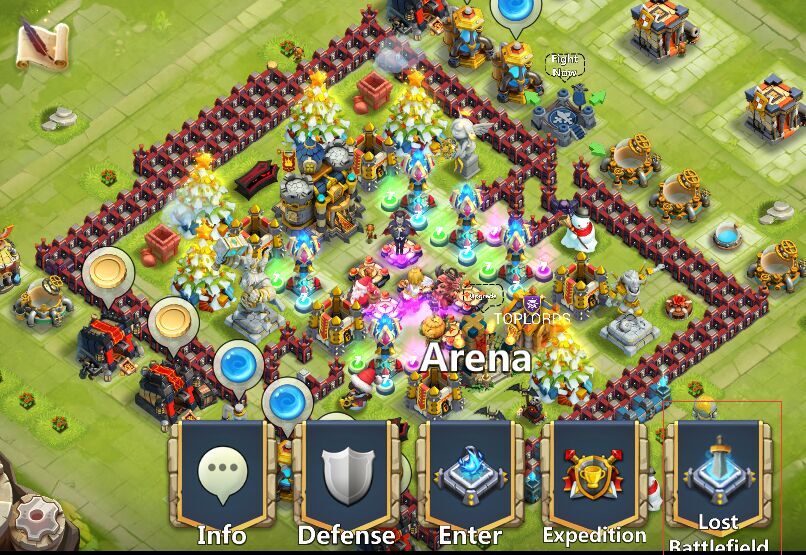 Lost Battlefield Interface:
Once you’ve formed your teams, you’ll be brought to the Lost Battlefield main interface. There are five main buttons here, as shown in the image below. 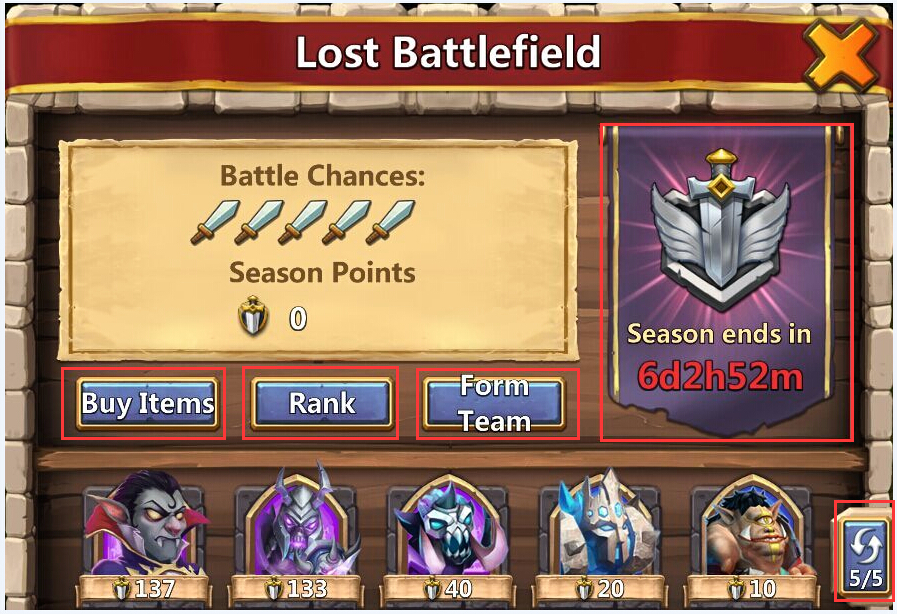 *Tap the “Rank” icon to see how many Season Points you need, the bonus Fame you can earn per battle, and the amount of Gems you can win at the end of the Season based on your rank.

*Tap Buy Items to enter the Warehouse and buy items with Fame. Fame can be earned by fighting in the Lost Battlefield.

Rank: This is a ranking of Season Points earned in the Lost Battlefield. The first row displays your rank, Season Points, and the amount of Gems you’ll earn after the Season ends. The rankings update daily at 00:00 EST (GMT -5).

*Form Team:
As introduced earlier. tap this to manually change the list of five opponents to fight. The list can be changed up to five times a day. Chances will be replenished daily at 00:00.

Battling:
You can challenge other players by selecting their Hero portraits in the main interface of the Lost Battlefield. You can then decide the order to deploy your teams. 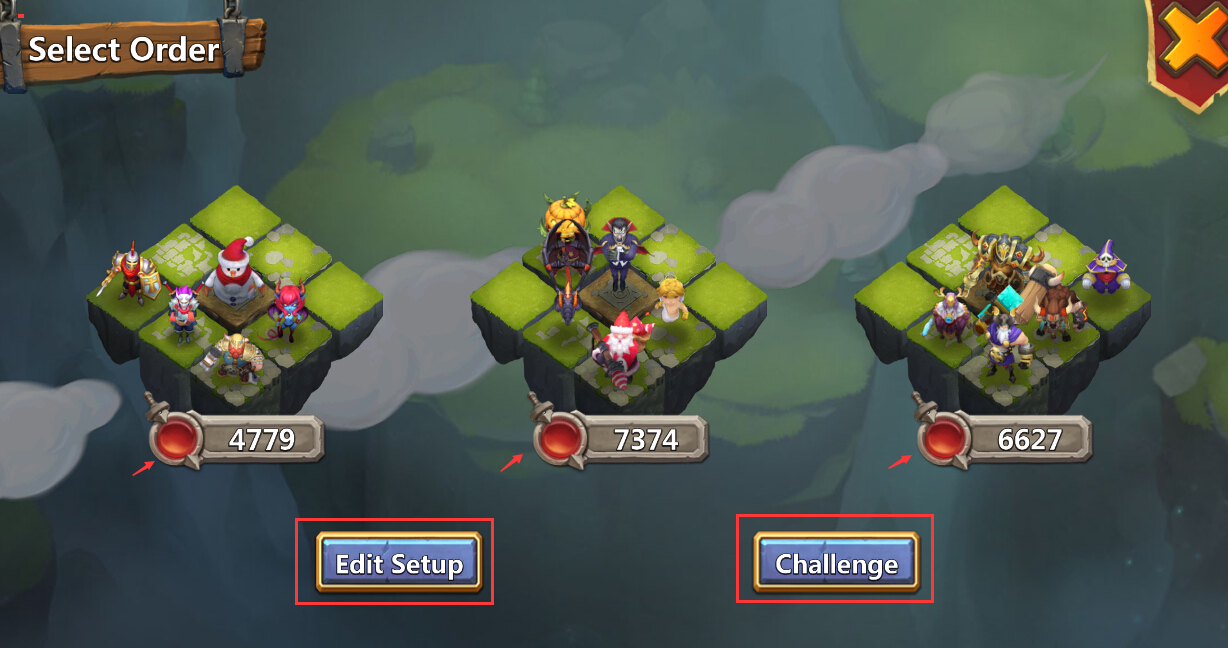 *Edit Setup: Tap this to change the order that your teams will battle.
*Challenge: Tap this to begin the battle. If you don’t assign an order for your teams, they will be set to default and deploy from left to right.

There are up to three rounds in a Lost Battlefield match. The battle process is the same as that of the Lost Realm. The Lost Battlefield employs a best-of-three playstyle, so all you need to do is win two rounds to win the battle.

*Season Points: These are the points earned in battle. They reset after every season. The more Season Points you have, the more Gems you’ll earn at the end of the season.
There are five different ranks based on the amount of Season Points earned. They each provide a different bonus to the Fame earned from battles.

*Season Rewards: When the Season ends, you’ll earn Gems based on your total Season Points and Rank position. For example: If you're first in Rank 2 with 599 Season Points, you’ll win 200 Gems. The higher your ranking, the more rewards you’ll win).

Note: If two players have the same amount of Season Points, the first to win the amount will be ranked higher.

The amount of Gems awarded based on rank and position is as follows:

Each Season lasts for a week. A new Season begins every Monday at 00:00 (Sever Time).

After each Season, tap the “Rank” button to see the Rankings and collect your Season Rewards. Season Rewards will be replaced by new rewards when the next Season is over. Collect your rewards before they’re gone!

Season Points reset when you enter the Lost Battlefield during the next Season.

E.g.: Player A did not enter the Lost Battlefield during a new Season, so his Season Points have not been reset. If Player B has been matched to Player A, he will still see Player A's Season Points from the previous Season.

However even if you did not enter the Lost Battlefield during the current Season, the previous Season Points will still reset when yet another Season begins.

Questions -
1) How come we can't see opponent's teams before we challenge, like in LR, which is more similar to LB than Arena?

It seems like IGG wants to give us the chance to strategise and choose which order our teams would fight in, but without seeing the opponent's teams it's all meaningless.

2) When your opponent challenges you, I assume you lose your ranking. Do you also lose season points?

Eva1210 Rated on 7/21/15 12:15:15 AM
1. if you can see your opponents team, you will easy to win them, and you can inform your friends about his/her set. It's not fair for your opponents. Anyway, I've submitted your suggestion to Ops to consider. 2. The season points wont be lost even if you lose the ranking.

LordFarkward Rated on 7/21/15 5:57:45 AM
Chromeski - it's like you can see the opponent in LR so you can set up your team. How is THAT dumb... IGG lets you set up 3 teams, then lets you choose which order they'll fight in, AS IF you can do a lot of strategising. But in fact you don't, you just pick the teams, pick the order and hope for the best - not very strategic.

Dralix Rated on 7/21/15 9:25:06 AM
In LR, you can see the setup of NPC opponents, not players. There is still strategy involved in setting your teams, but it's based on imperfect information.

Follow up question - does it matter if I win in 2 rounds or in 3 rounds? Or are the rewards the same? Thanks again.

nikgreece Rated on 7/21/15 4:27:41 AM
i win all battles in lost battlefield and i collect 130 season points ,i see that other people collect much more ,what is the key for more season points at battle ?

Do players with higher rank then my always appear to the left ?
So, its opposite from Arena in that matter ?

Thanks for the info very helpful.

When i won higher rank i got 31
then, i refreshed 2 times and didnt get higher ranks then me..
so i had to fight lower one, and got only 20 for wining..

I understand it a lil more now, was a lil confused to how fame works, but its been answered in here