Here’s a quick guide to the Guild Turf, a new feature added to Castle Clash specially for Guilds!

From your base, tap the Guild building, then tap Guild Turf.

Note: These buildings can only be leveled up or moved by the Guild Leader. 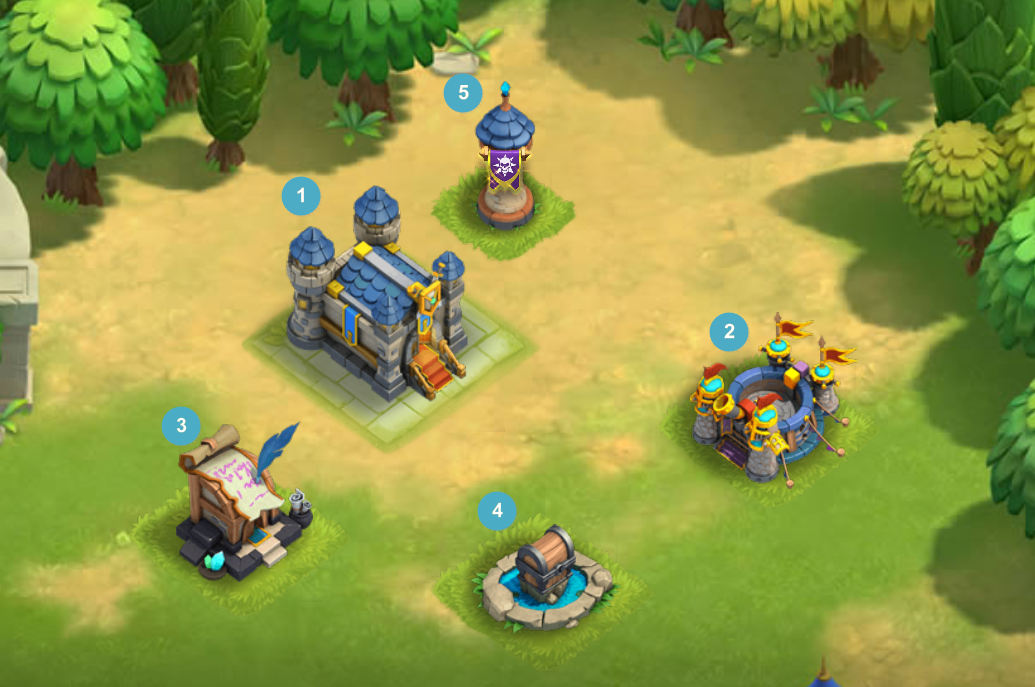 1) Guild Hub: The main building in the Guild Turf. The current maximum level of the Guild Hub is Lv 12.

Upgrades: Level up the Guild Hub to increase the maximum level of other buildings in the Guild Turf and the maximum number of members the Guild can have.
Function: The Guild Hub displays basic Guild information and allows management of the Guild. You can do the following at the Guild Hub:
①Manage Guild members
②View Guild information
③Change Guild settings
④Donate Shards to the Guild
2) Coliseum: Allows Guild members access to Guild events. The Coliseum cannot be upgraded.
Function: You can view and take part in Guild events from the Coliseum.
3) Magic Bureau: Manage Guild Charms here. Guild Charms replace Guild Flags in older versions of Castle Clash. The current maximum level of the Magic Bureau is Lv 5.
Upgrades: Level up the Magic Bureau to unlock more Guild Charms and increase their maximum levels.
Function: Research and level up Guild Charms here.
Note: Guild Charms will be in effect for a validity period, so you don’t have to buy and activate them like Guild Flags. 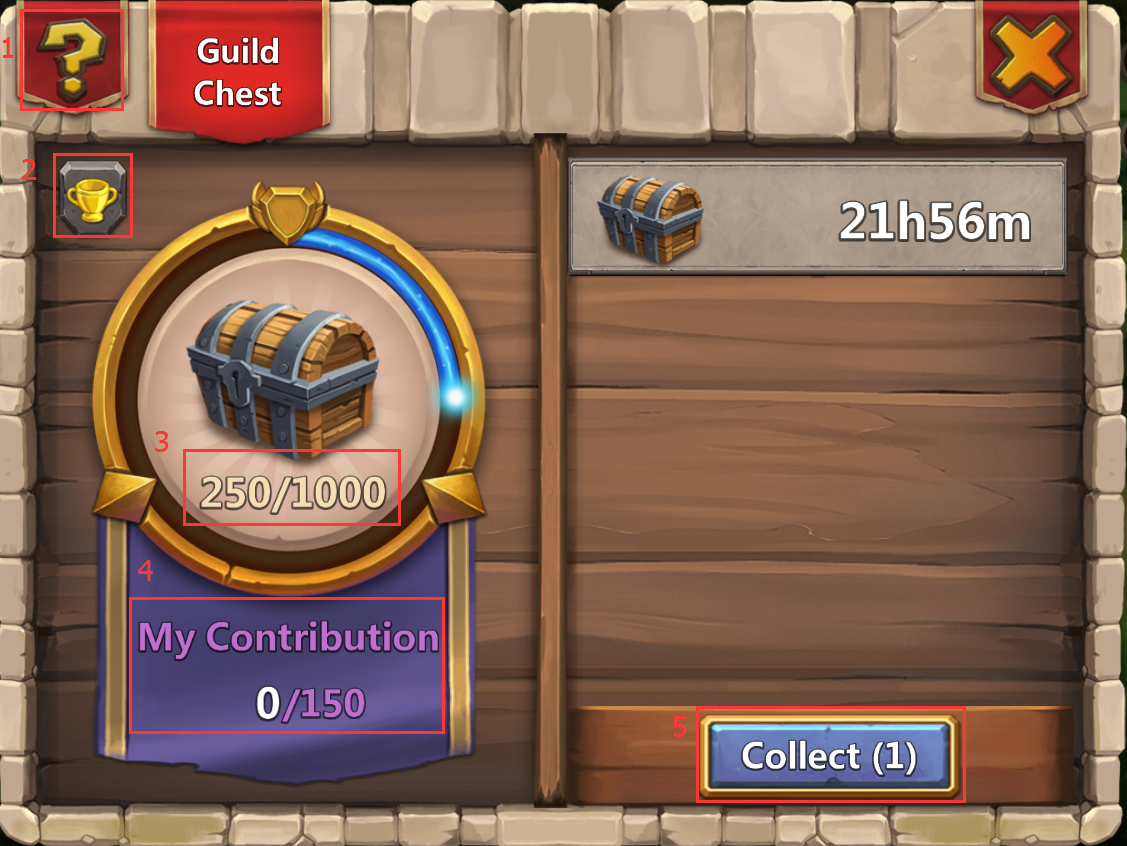 1. Tap “?” to view the Treasury rules and the reward contained in each Guild Chest.
How to earn Contribution: Take part in Dungeons, Raids, Expeditions, the Arena, the Lost Battlefield, Hero Trials, Here Be Monsters, Team Dungeons, or Here Be Monsters. You can also earn them when you take part in Guild Events, obtain Pet Eggs, use Stamina in the Lost Realm, and when you use Gems.
2. Tap the Trophy to view the Contribution rankings of Guild members.
3. This is the progress of the current Guild Chest. It shows the current and total required Guild Contribution. Each Guild Chest will unlock with a different amount of Guild Contribution. Once the requirement is met, all Guild members can collect the chest.

Here’s the required total Contribution of all Guild Members for each Guild Chest:

4. Each player can only get up to 150 Contribution per day. Daily Contribution resets at midnight.
5. Chest Collection: Each Guild Chest will be available for 24 hours after it is unlocked. After 24 hours, the chest will expire and can’t be collected. You can store up to 20 Guild Chests for collection.

5) Guild Banner: This is a decoration that features your Guild’s banner.

Isn't the Guild Chest dependent on the level of the Guild Hub?

In other words, can guild with Guild Hub at level 10, collect Guild Chest III if daily contributions of 5000 are met? This would be 58 players making 150 points contribution for total of: 5,100 points

We have made this level of daily contribution but only able to collect Chest II as our Guild Hub is level 11 and not level 12 yet.

LeonGRAY Rated on 1/19/17 9:51:21 PM
I see, thanks for the clarification. I did believe and then I confirmed my suspect would be correct. Please note that the odd of generating the guild chest level has noting to with the Guild hub, but reflect on the level of your Treasury.

viperstrike2015 Rated on 1/19/17 10:29:14 PM
Thank you Leon. I did some digging and it seems chests are generated randomly and not sequentially (chest I, then chest II and then chest III). As the Treasury level is increased the the probability for the system to generate Chest III which then has to be unlocked by making 5000 credits donation, is increased. The game generates random chest levels during the day. I was under the impression that they are sequential: I, II, III

Circus_Maximus Rated on 1/22/17 2:59:44 AM
I have some questions about guild chests too. I've upgraded our treasury to level 2. We are still only getting level 1 chests and they still only cost 1k. When will we pay 2k per chest and see level 2 chests? Is it at treasury level 3? Do you have to be level 5 to get level 3 chests? Hope someone can clarify this for me. I am getting all kinds of different information.

viperstrike2015 Rated on 1/22/17 9:38:07 PM
The type of chest is not dependent on the level of the Treasury building. You can get all three types of chests but the probability is lower at level 3 than at level 4 and level 5. That's why is recommended to upgrade the Treasury building: to increase the probality

@Leon: it seems like "use a flag" was removed from the QB and only guild donations was left. It seems like i have to donate shards during every QB now, and at high might that can lead up to ~450 shards/day.

Can you guys look into balancing it out a bit more? Just like how it was in the past? At a certain point guild credits have limited value, and the resources are better spent improving heroes.

This is a really stupid idea. There was nothing wrong with how it was.

Oh guild rewards, why are you so shit?

Idea was interesting to create different zone and add buildings for different feature, i hope it will be used on some new game mode in future, cause now it is only cosmetic change imo. But let's move to conclusions, shall we ??

+ Managing guild and contacting members have improved, now you can send priv message to any member of guild and that's good, not only to friends. Good idea.

+ Changing banners, it is thing i was missing whole time, to be able to change banner, who said it must be same all time ? Good idea again

+- Another good thing is big info screen after entering guild, but here comes small disappointment: only 85 letters..... are we in 64bit computers age ?? I'm sure there can be much more like 200 or even 300. This needs to be changed.

+- Guild chests are good idea, but not thought well: tiny contribution (could be higher), not big rewards (could be better), huge cost of upgrading..... Many ppl now think it is not worth to upgrade treasury cause it will take a loooots of time to get back shards. I understand we will receive better rewards with higher lvls like red and blue crystals or fame (which i don't know how much atm), but you could at least put there blue and purple shard boxes too. Books are there, so why not all shard boxes. You added sweep function, which changed game already, do same thing with boxes, to be more player friendly. Still how many best chest full member guild can have in one day ??

- Turf usage. Only good reason to go inside Turfs now is buying totems (which i must say i was expecting to be visible on guild screen, like flags before, there is room in Guild Hub, next to Settings, so it can be fixed there). This change may irritate ppl, cause even chests appear on main screen and we don't have to go inside Turf. UPDATE: totally forgot guild leader can upgrade buildings from there but only he, so statement is same for everyone else.

- Question is why only guild leader can change buildings and upgrades arrangement inside Turf ?? What with Vice ?? They have leader trust, so they should be able to do it too. After all all leader decides what to do with guild.

This is all things that come with Guild Turfs. I think you will understand our position, and improve it with one of next updates (well you did listened to ppl, and removed Guild Boss quest and Egg quests, changed Avaricifier also, so why not improve Turfs ?)