[Guides] A Guide to Insignias! And when to convert them!

First a shout out to Grave_Intent, in_sight, NoxiousX, and Fe203 for discussing insignia with me on the forums. Thanks!

An insignia is an addition to the crest system. It is a better way to change and manage crest sets. An insignia is a combination of a I, II, III, and IV crest of the same level to make an insignia of that level. For example, instead of having a level one crest set of sprint, four crests (I, II, III, IV) of a level one sprint, you can now convert those into a single insignia. An insignia looks like a blue crest, but the etchings are different. An insignia of a respective level sells for the same amount of blue crystals as four crests at that same level.


An insignia is made when you take the same level crest set, such as level 1 I, II, III, and IV of sprint, and convert them into an insignia. It is free to convert, takes less time to swap in and out than crests, can free up space in the warehouse, gives a slight bonus to damage and life compared to a crest set at the same level, and has both reasons for and not doing.


It is important to note, whether you level up crest sets to level 5, or insignia to level 5, both will use the same amount of crests and red crystals at each level. As far as resources are concerned, there is no preference.


There are four or five different paths you can take to access crest and insignia management tabs. Three from there warehouse and two from the heroes alter.


Alrighty! Before we learn how to convert crests to insignia and upgrade them, lets first go over the reason to convert and not to convert. After gathering intel from other clashers I started converting crests to insignia and there are both benefits and some minor drawbacks to making insignia, but nothing is permanent or a major "wops" so don’t worry too much, or as Adams would put it, DON’T PANIC!


Excerpt from “The Forgotten Clasher”

“To convert or not to convert, that is the question:
Whether ‘tis nobler for the hero to suffer
The uneven crest numbers and filled up warehouse,
Or to leave crests forgotten but have an easy insignia.”


2: Reasons to convert insignia to crests!

1: Easy to swap in and out one insignia instead of four crests. 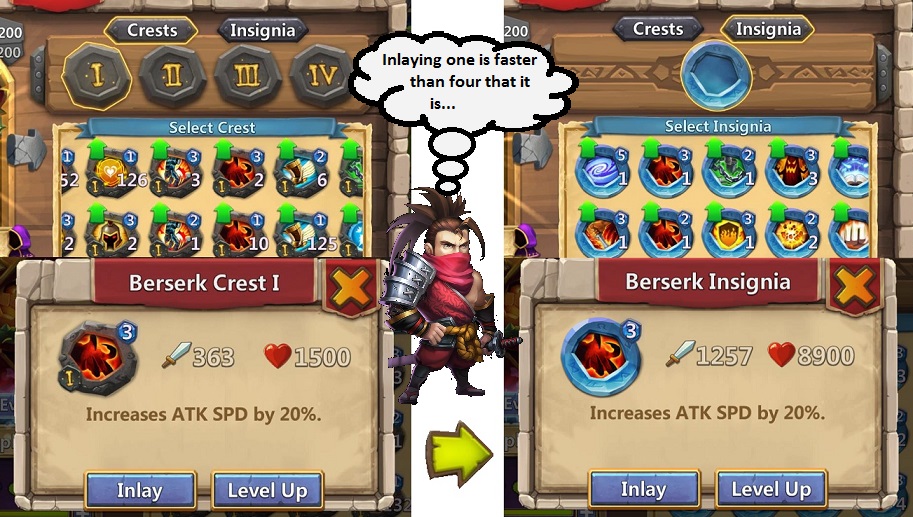 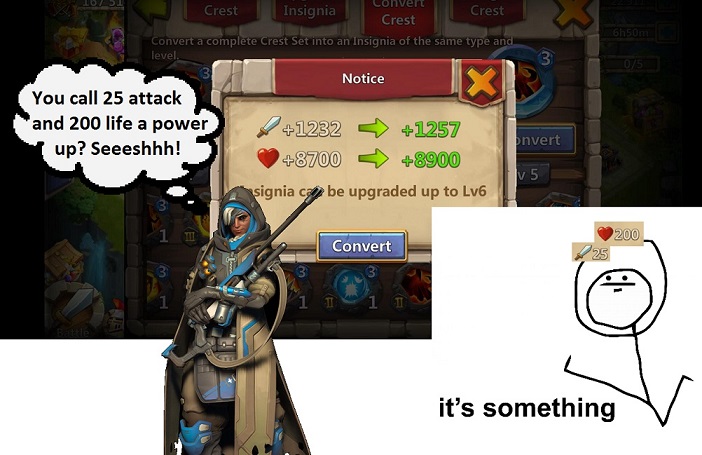 4: Insignia storage room appears to be unlimited and free! You don’t have to pay to upgrade the insignia bag space like you have to do with the warehouse space. 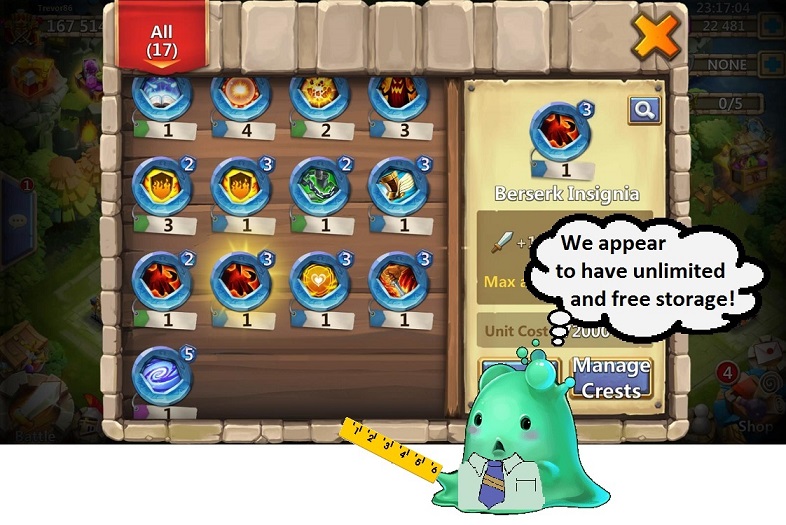 5: Your crest set reached level 5! If you have a level 5 crest set, converting it will give you added damage and life, possibly free up room in the warehouse, and make it easier to swap in and out.

6: You can only obtain a level 6 insignia; there is no way to combine crests to make a level 6 crest or crest set. 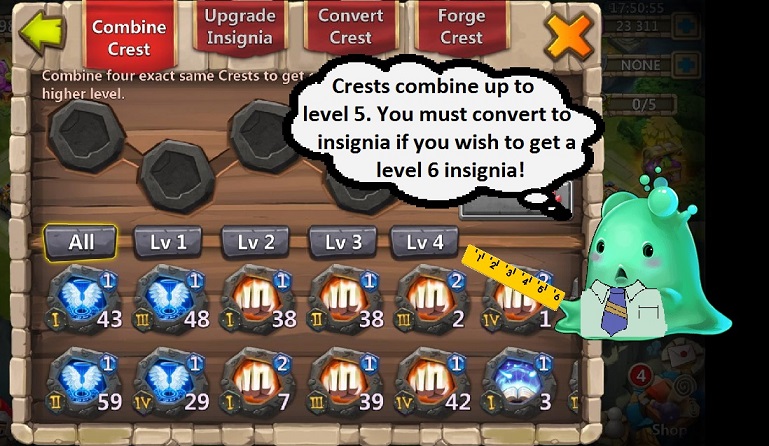 So why wouldn't you want to convert all your crests to insignia? They give more damage, life, warehouse space, easier to swap, they’re cool, blue, and new. What’s not to like?

3: Reasons not  to convert crests right away.

Eventually, you'll want to convert all crests to insignia at level five, but until then, you might want to hold off on converting some. Here are the reasons why. 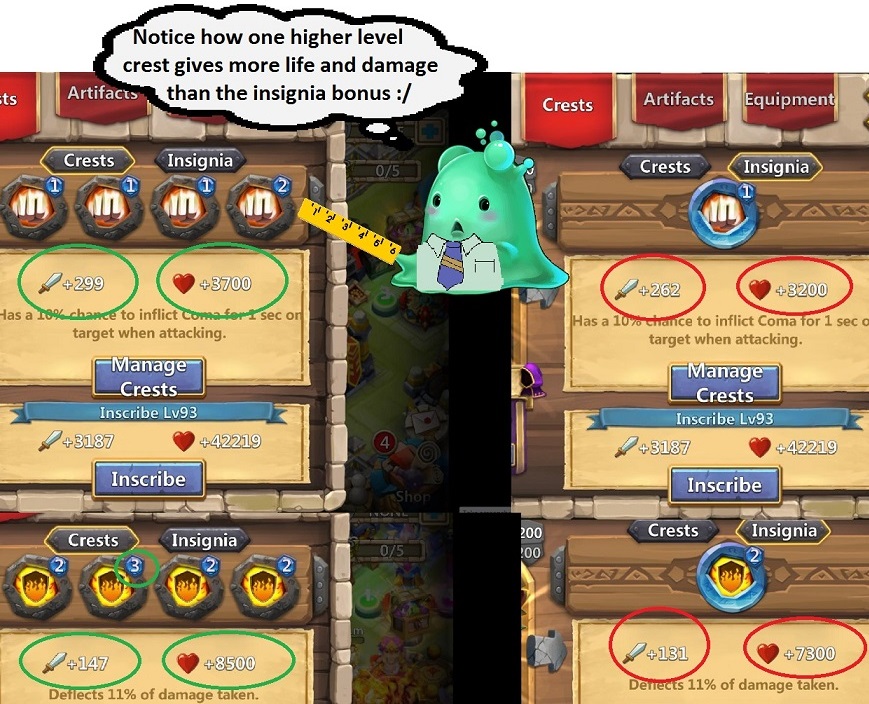 2. When you open crest bags the RNG (random number generator), isn't probably gonna give you crests of each roman numeral at an even rate so you might be better leveling crests individually instead of converting to insignia right away. 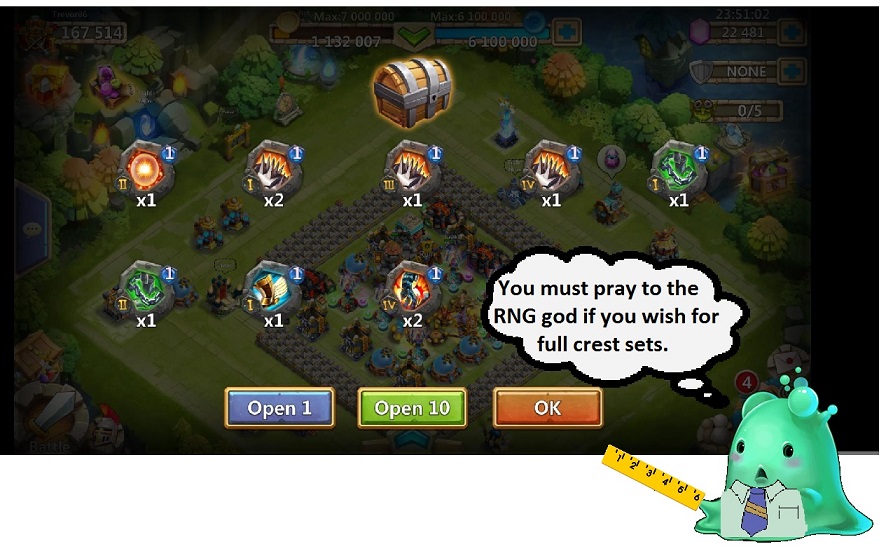 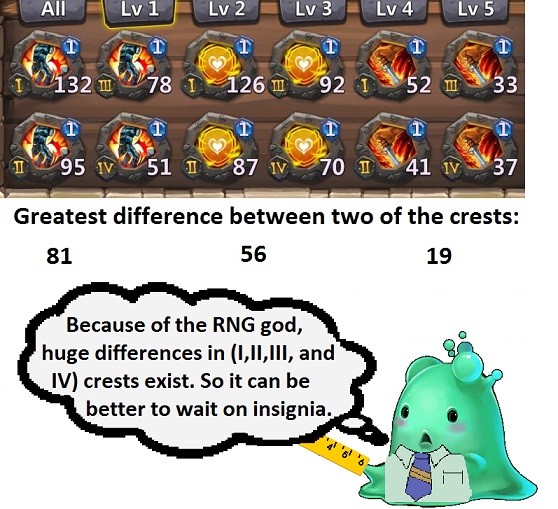 3. From castle crisis, lost realm, and in-game events/gifts you can get crests boxes, crest trunks, and level 2-5 crest bags which drop a level 2-5 crest. If you always level your level 1 crests into insignia right away your level 2-5 crests might be stuck until you get enough level 2-5s from boxes, trunks, and 2-5 bags. So if you open a mythic crest box and out comes a level 2 (III) revite crest, you might want to save up four level 1 revite crests of  (I, II, and IV) so that you can upgrade those crests to level two and then change those four crests all into a level two insignia. 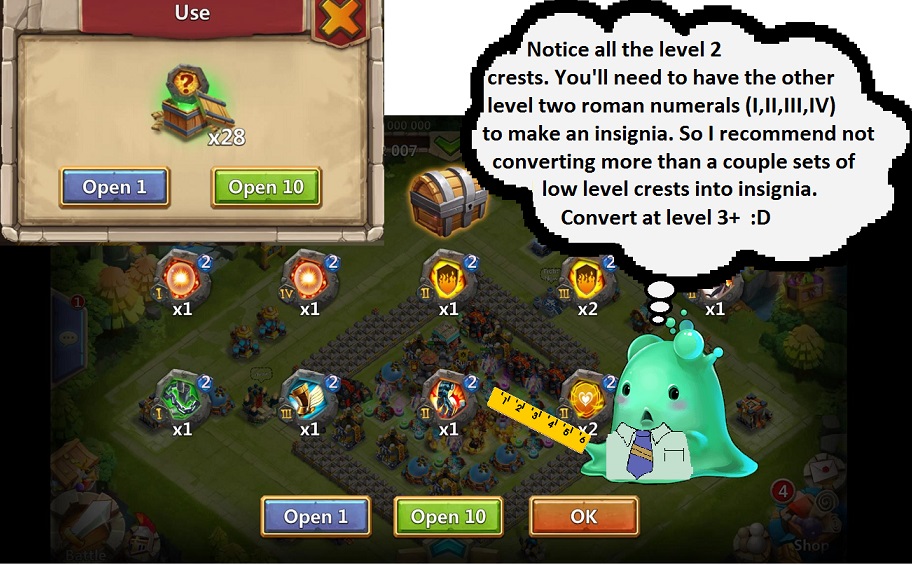 Another example: If an in-game event gives a gift of a level 5 crest bag and you pull out a level 5 (III) stone skin, you'll want to save up enough crests of I, II, and IV stone skin so that you can use that level 5 IV stone skin crest with the rest to make the crest set and then form into the insignia.

Because of crest boxes, crest trunks, and level 2-5 crest bags, I highly recommend waiting until your crest sets become level three or higher before converting. It’s alright to have a couple level one and two insignia of each crest just to throw on guys, but I highly recommend only having just one or two of a low level insignia. Save your crests up and convert to insignia once you have a level 3 set or higher. That way if you open up crest boxes, trunks, and high level bags, you can level up your crests so you have a full set instead of odd crests out.


4: How to convert crests to insignia!

It is important to note that it doesn't cost anything to convert crests to insignia; only to upgrade them. Once you have a level 5 crest set there is absolutely no reason not to convert the level 5 crest set to an insignia right away as it will give you a bonus to damage and life, is easier to swap in and out than four crests, and might free up some warehouse room.

How to convert crests to insignia:
1: Simply click on the warehouse.
2: Click on the new “Insignia Bag” button at the bottom.
3: Click on the “Manage Crests” button at the bottom right.
4: Then click the “Convert Crest” tab at the top.
5: Find the crest you want via the “All” or “Lv 1-5” button.
6: Click on the desired crest.
- It will automatically put in one of each level or what you have of that crest set. If you don't have one of each level, you won't be able to hit the convert button and you will see the grayed out one(s) that you are missing.
7: Hit convert. It will show you the added damage and life you get by making it an insignia, confirm by hitting convert one last time.
8: You can now find your crest by clicking on the warehouse and clicking “Insignia Bag”.


5: How to upgrade insignia!

How to upgrade insignia:
1: Simply click on the warehouse.
2: Click on the new “Insignia Bag” button at the bottom.
3: Click on the “Manage Crests” button at the bottom right.
4: You should default to the “Upgrade Insignia” tab, if not click it.
5: Find the insignia via the “All” or “Lv 1-5” button.
6: Click the insignia.
7: Click the button that shows how many red crystals it will cost you. It is important to note that once you hit that button, the upgrade happens. It does not show you the increased stats before or give you a chance to change your mind. Those red crystals will be spent.


This might be a bug, since the convert feature shows you what the upgrade will do and makes you press the button again. I would think this one was meant to show you the upgrade from level to level and give you one last chance to see if you want to spend the red crystals for the upgrade.

Well, I hope this guide has everything you need to know about insignia! Please message me if you think I should change or add something!

Great post I came on the forum looking for this info! I guess I'll get busy converting all my crests! So much free space

Trevor86 Rated on 6/14/18 8:51:48 PM
It can be good xD It's not a very big mistake if you convert crests to an insignia when you could have been using a level 3 crest of I, II, and III, and a level 5 crest of IV. Just a bit of life and damage lost. That being said I freed up 25 warehouse slots and got rid of a bunch of level 160 heroes that were holding crests I only had one of that are now just in my warehouse. And even with those in my warehouse I still freed up 25 slots. So pretty crazy how much room you can save!