[Guides] All about Fame

Right now, Castle Clash is game that needs 1 specific resource for almost all features that allow the player to develop better attributes and enhance the skills of the heroes. And yes, it's Fame. 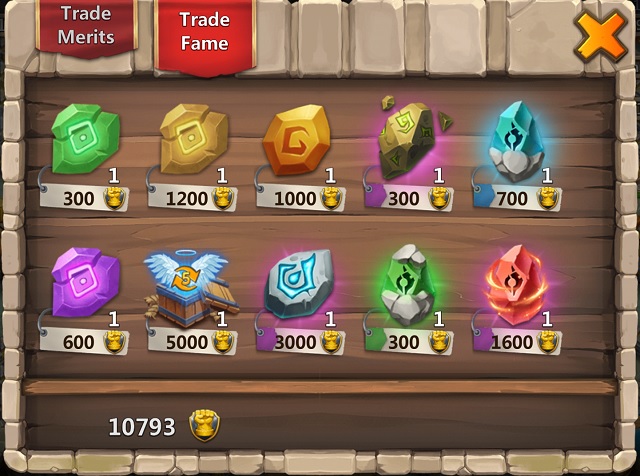 Shortage of Honor Badges and Shards are nothing compared with the shortage of Fame. So, if you are an endgame player, you know all I'm going to say from now. If you can afford a 99.99 $ pack from Bazaar that includes 60K Fame, then Fame is not a problem for you.

This thread is focused in explain to new players (or returning players) the usage of Fame inside Castle Clash and the ways to get this important resource.

Fame has always helped to make your heroes more powerful. First, it was released to allow the level up of Talents from 5 to 8, using Talent Runes (Also there is the option to purchase a Talent Box level 5 for 5k Fame, but it's so random that you can get a Self Destruct, for example). After that, the option to Evolve a hero was added and again, Fame was required to purchase the Evolution runes.

And since then, all new features that upgrade our heroes involves Fame as the main resource, like Equipment and Destiny System.

You need 10 of each of this runes to reach next Talent level. In total, you will need 21k Fame to level up one talent from 5 to 8. 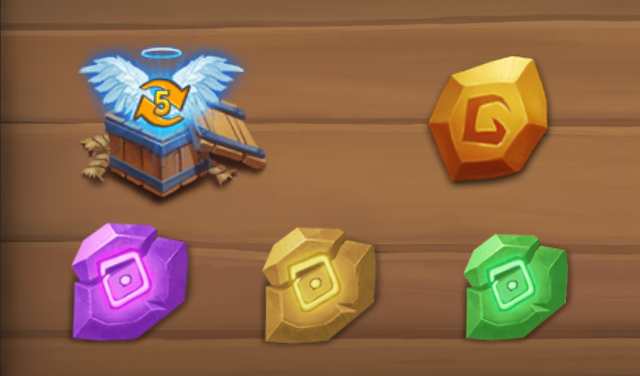 There is only one type. You need 1 for Single Evolution and 5 for Double Evolution. This means to Evo and Devo the same hero, you need to invest 6K Fame. 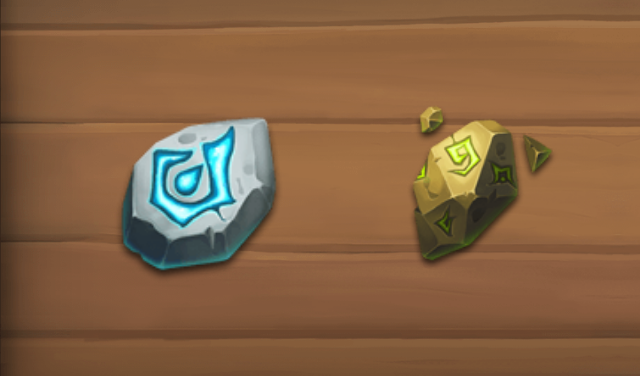 Has 2 different stages. The first one needs Aetherocks. The second one, Augmentation, needs Augmenting Stones and Oath Tablets if you don't have duplicates of the hero you want to Augment. 5 Oath Tablets are equiparable to 1 Duplicated. The Fame cost of Augmentation will depend on the dupes you have. Worst case scenario: no dupes. You will need 1 Augmenting Stone and 10 Oath Tablets, for a total of 6K Fame. 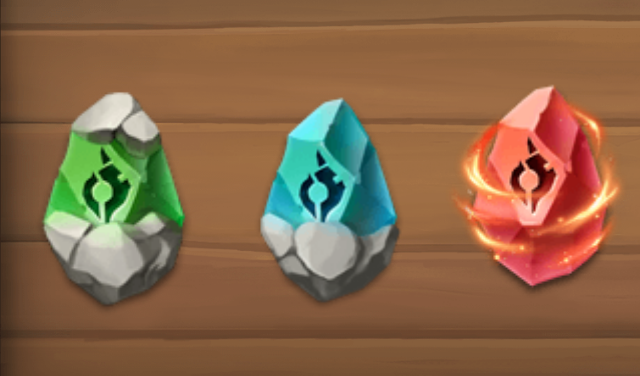 For now, this is the feature that consumes the biggest amount of Fame, because allows the player to increase the skill of selected heroes to level 12. Adding all the Karmic Rocks you will need, plus the Oath Tablets (if you don't have duplicates of the hero), to reach Skill 12 will mean invest 93K Fame for each hero.


Don't feel discouraged for all those numbers. Right now we have many options to get Fame in Castle Clash, but you need to learn to give priority to some of them even if you think is a waste of time.


Usually, to save Fame, players only keep in mind 3 big events: 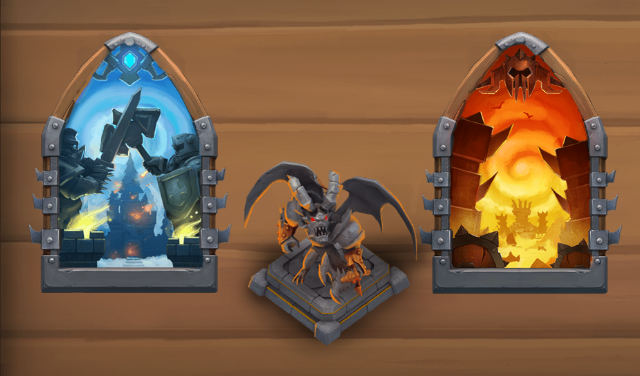 *Guild Wars: played twice in a week. An average player with not a high might can score enough points to get around 800 to 1000 Fame each time. That's 1600 to 2000 Fame per week.
*Fortress Feud: played twice in a month. In the same case scenario from above, an average medium might player can get around 1000 Fame each time. The number of Chests you will get depends on the place your Guild is ranked during FF but also your might matters. This mean, 2000 Fame in a month.
*Archdemon (from Castle Crisis): since this event schedule is really irregular, maybe you can fight against the Archdemon once or twice in a month. A medium score can easily reward you with 800 Fame.

But there is life (and Fame) in Castle Clash outside those events, so let's check them all and you can decide which ones do you want to play to get more Fame in a regular basis, considering if they are daily, seasonal or if are events in-game that awards items that costs Fame.

- Lost Battlefield: people tend to think the best reward from this game mode is the gems by the end of each season, but the most important thing is the Fame amount you can win playing Lost Battlefield every day and trying to beat the better-ranked opponents. If you win your 5 battles (and again, depending on the people you find to fight) you could easily achieve 150 Fame. And I'm being conservative because on the first day of the season, if you battle players that didn't reset their LB yet, you could easily get 60 Fame from each battle you won, and that will be 300 Fame in a day.
- Daily Sign-in: recent changes on the rewards from log in daily on the game includes small amounts of Fame every 2 weeks (one week you receive Honor Badges, the next week you will receive Fame).
- The Quarry: If you can do without 1 or 2 builders/goblins, check the tasks from The Quarry and wait for the ones that award Fame. So far, you can get 40, 80 or 120 Fame from them. And if you spend some gems, you will get it twice.

- Squad Showdown: by reaching Invincible 5 you should get 800 Fame when the season finishes. But if you are a very modest player, you could keep trying this game mode to get around 150 to 300 Fame from each season.
- Arena: another game mode by season, and for many players is unfair because the final ranking is decided on the last minutes of the season. However, with the Law of Minimum Effort, you should be getting 80 to 100 Fame per season.
- Labyrinth: again, using the Law of Minimum Effort and trying to get as many points as you get on the first day of the season, you could score enough to receive 100 Fame. 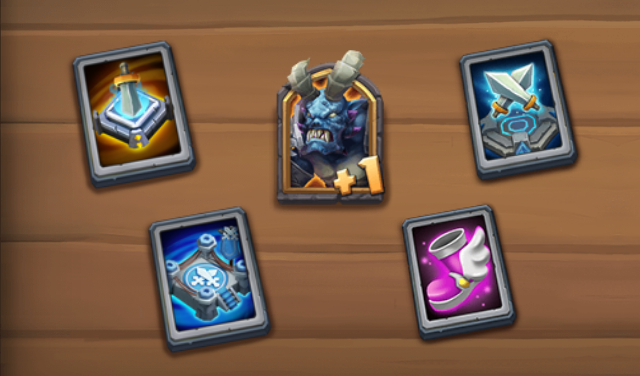 Tiny pieces of advice you didn't ask for:

*Check Warehouse every day and buy cards for Arena, Squad Showdown, Lost Battlefield, Archdemon, Stamina for Labyrinth. Each extra chance matters if you need Fame in a desperate way.
*Even if Seasonal game modes look a waste of time, those small amounts of Fame helps a lot.
*Check the Event Central, don't be shy. Usually, they are events were F2P players can participate by saving free gems and spending them on specific ways, rewards can include Fame (or items that costs Fame). An example of this is Enchanting Changes which I mentioned above. If you refresh 2 Enchantments with gems, you will get 1 Evolution rune. Let's do the maths. If you use those gems in roll heroes you will get 3 Fame from a 150 gem roll and 9 Fame from a 450 gems roll. 12 Fame for 600 gems. But if you decide to be wiser and refresh Enchantments during that event, you will get in return an item that costs 1000 Fame for the same 600 gems.

Sorry if it's too long, but Fame deserves all the talk because the game totally revolves about a wiser usage of this resource. Now, is up to you to give the priority to that usage.

***If you think I've missed any other source of Fame or that should be added another event that awards this resource, feel free to comment. And this way we can work together to keep this thread updated for everyone looking for Fame in game.***
Rate Delete Ratings
Manage

This is a really well thought out and detailed Guide!!
You can also win Karmic Rocks from Arid Ruins at 300 Fame value each.
1 or 2 a day can add up very quickly

Great work Sao This Should be an Useful guide for Everyone and Help us  to understand  how to get fame and how to use it.