To all our Brave Warriors!
We’reproud to announce a new feature following our latest update (1.2.15): HeroForts!
Heroes can now be deployed in upgraded Towers (Level 10 and above) to increasetheir damage against enemy troops.

Tapping on any upgraded tower will bring up the Deploy Hero option. 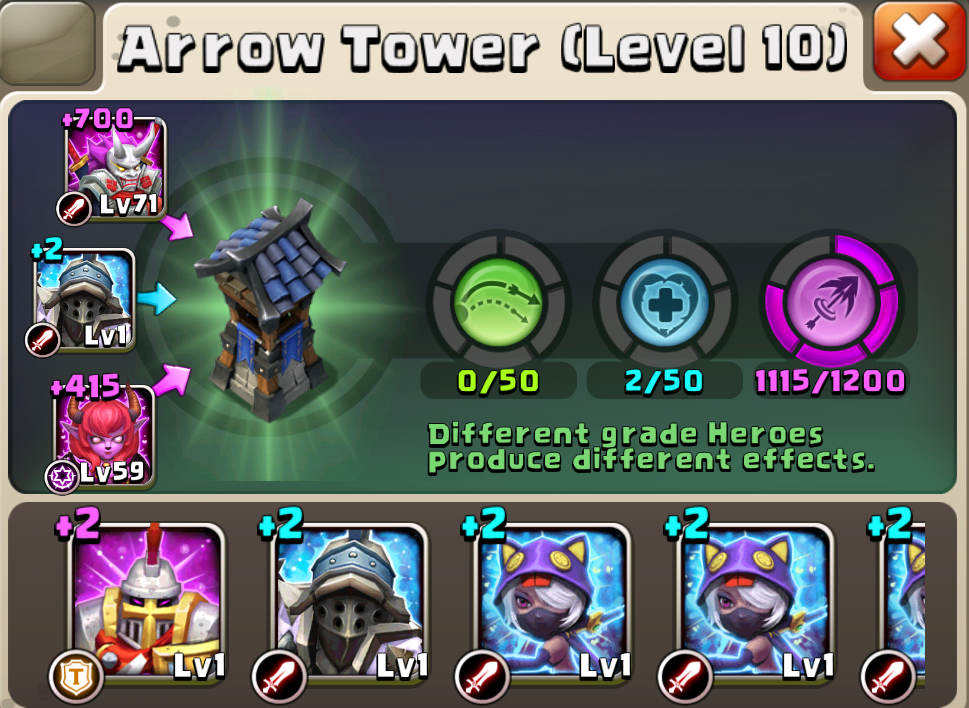 nly Upgraded Towers (Level 10 and above) possess the different skill effects.Skills can increase a Tower’s attributes and the skill effects unique to eachtype of Tower.

Up to 3 Heroes can be deployed in each Tower
Note:Every Tower can hold up to 3 Heroes and skill effects increase according to theHero’s Deployment Points.

Heroes that have been deployedcan be removed from the Tower

Deployment Points are determined by a Hero’sLevel, Skill Level, and Grade
Note: Deployment points are calculated based on a Hero’s Skill Level and Grade. Thesepoints then add to the respective Tower’s Skill to increase the effects of thatskill.
Furthermore, increasing a Hero’s level also increases that Hero’s DeploymentPoints.

Tower Skill levels are divided into 5different levels
Note:Every skill is divided into 5 levels
Tower skill effects are activated according to the Hero deployed. The basevalue of all Tower skills is 0.
(Towers skills have to reach a minimum of Level 1 to have an effect whendefending against attacks)

Note: Heroes that have been deployed in Towers are assigned Deployment Points.
These points add to the EXP of the Tower’s Skill corresponding to the Hero’sGrade. This increases the Skill’s Level for it to take effect.
Hero Grade (Deployment Points)

Heroes of the same Grade can bedeployed in the same Tower.

However, duplicate Heroes cannotbe deployed within the same Tower.

and also are we able to deploy a heros onto a fort and hero base concurrently?

Spatzl Rated on 10/1/13 5:52:29 AM
Yes, they can. You can use your Arena Team in the tower and still fight arena battles with them while your base defense team is on their respective hero bases

and now we need more heroes .

cool story bro...but where the find a friend update..you guys seem to be added all the new features that your fan base doesn't ask r care for

Hmmm... So... To stop the issue of might causing a defence to be incredibly underpowered we'll now have to increase our might even further?

It will be interesting to see how someone with 5 Hero's that are incredibly high level as well as maxed troops and magic skills will do against someone with 5 much lower level Hero's and 9 Hero's in their garrison. I assume that they will be roughly the same might levels.