Entering the event:
1. Tap the portal that appears on the left side of your base when you start the game. 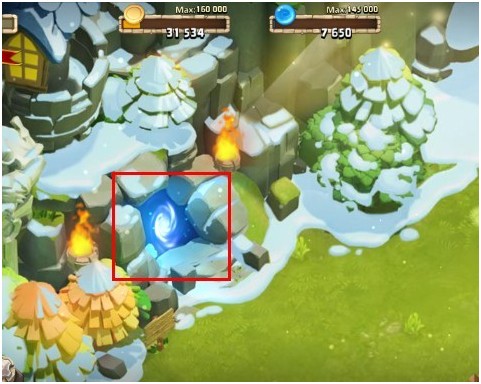 2. The event menu is simple and easy to navigate. Tap the Start button to begin the event if you’re trying it for the first time. Players that have completed the first tier of enemy waves will unlock access to the second tier, and so on. The next time you enter "Here Be Monsters," can select any unlocked tier. 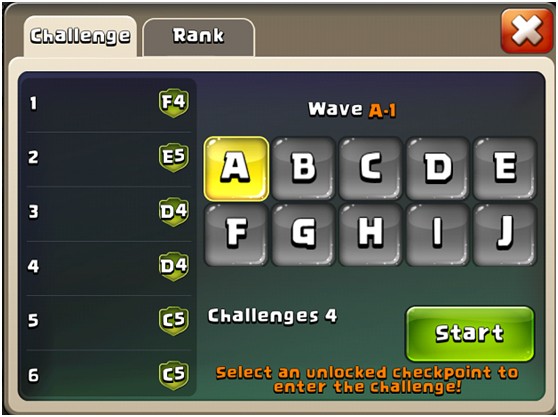 3. Once "Here Be Monsters" begins, you can’t access any other Castle Clash features until you complete the event or decide to quit. Sit back and enjoy the mayhem or tap the end button to return to your village.

4. Each Wave you defeat grants a random reward, including Hero EXP, Gold, Mana, and more. Every 5 Waves defeated brings about a higher tier of difficulty as well as greater rewards. There’s even a chance of earning Hero Shards.

6. "Here Be Monsters" is divided into 10 difficulty tiers, labeled 'A' to 'J'. Each tier represents 5 Waves of enemies. The event ends once you defeat all 5 waves of the selected tier.

Tips and Tricks for "Here Be Monsters":
1. The "Here Be Monsters" event is similar most tower defense games. The unique trait of this event is how the monsters are spawned from random positions. The each wave will never play out the same way twice. Your strategy will have to consider all possibilities in order to successfully overcome this challenge. As a general tip, your non-defensive buildings can be used as obstacles to protect your defensive buildings. This buys you more time for your Troops and defenses to defeat the invading monsters.

2.  It’s not just enough to keep your defenses alive. To complete a wave and move on to the next one means eliminating all the enemies in a wave within the time limit. If you don’t position your defenses and Troops well, you might not be able to maximize your firepower on the invading forces, causing you to take too much time to defeat them.

3.  Any Heroes that participate in the event will each earn an equal share of the bonus EXP reward. This includes all the Heroes stationed at the Hero Bases and any Heroes stationed within Lv 10+ Towers. If you want to use "Here Be Monsters" to level up Heroes faster,deploy fewer Heroes in order to increase each participating Hero's EXP share.

4.  You can’t access any other Castle Clash features once "Here Be Monsters" begins. Prepare your forces well before you begin the event as you won’t be able to recruit new Troops until the event ends. The next difficulty tier unlocks when you complete all 5 waves of monsters successfully.

I just can't hide it.


I KNEW THAT PORTAL WAS MEANT FOR SOMETHING AHAHAHA.

Excited about this. Is there a time frame or better still a release date we can expect for this feature to be playable on our server?

heck yes! Any ETA on the update for this?

those are the Highest ranking player ever to reach the dungeon.
example like no.1 player reach dungeon F4, if you can reach F5, then your name will be the 1st.
follow by others....