I picked a name: Caixa de morte (means death box)
Well, thanx to Xurion for the name, it sounded interesting, and Death is what I bring anyway, maybe A kind of TM for me, naming my designs with death, could be a thing. But caixa de morte it is.

We all now that the AI have changed, and heroes/troops are more eagerly to walk around walls then before, so I was thinking, why won't we start abusing it even more? So I started thinking, and brainstorming and went back to the designing table. I wanted two entrances max originally when I designed the clover, but well, it didn't work out back then, but it might now. So I fished up my old design, modified it to fit the current AI and such, and here it is: 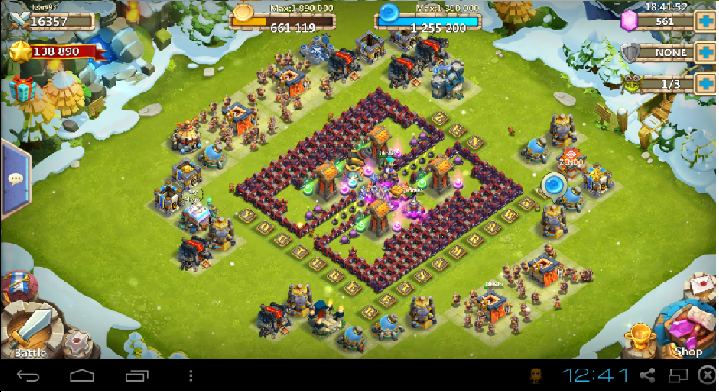 The thoughts about it is that the walls will actually lead the heroes around and around, because there is no point they will think that the walls are thin enough to be faster to break through than walk around. I also put the buildings in a certain way around, with a split point in the middles. This is just testing.

Anyway, only existing for 1 hour yet, so deep in testing phase yet, I like the idea, and I have seen it work already. Hope I can tweak it even more. Is it better than clover? (I honestly don't know, hence why I am testing with it.

Test results:
run1: nope, lost pd on wave 1, because buildings were to close
run2: easy, 1 tower lost in advance, 1 on G5. dino was owned tho
run3: switched some walls again, trying to push pathing. went well.
run4: nope, everything standed till G5, but dino owned, because TG died before he could proc, as did AC.
run5: switched some walls again, hoping they wont chew through the 1 wall section, they still seem to be tended to do so but was easy run. Lost no towers till G5, G5 gone in seconds.
run6: switched ninja (now finally 6 stars) for atlanticore, since ninja has more dps. Worked out fine, lost 2 towers, on G4 one, and g5 one.
run7: Went smoothly, new wall placement again, now they wont chew trough at all. lost 1 tower in G5, but lost ninja and pd too.
run8: Im feeling this base is quite alright, lost nothing until G5, only 1 tower lost, no hero losses. Ninja is a better hero to use than AC i believe, even though AC can save me sometimes, ninja increases quality. Recorded this one.
run9: I decided I would try limited garrisons on F. It was kind of an joke, I didn't lose a single tower or hero.
run10: Pushed my garrisons even further down (succ and champ out, so only snowy, ac and the blue for the cannon), still easy win on F.
run11: Moved walls around a bit again. 4th layer wasn't needed, so could double wall the full outer layer. Rolled reaper, yes i know I feel sooo bad, but I had a hunch, so I had to

. Anyway, he in tower too, doesnt matter much, but F was still easy. This one is recorded too. Video coming in a few minutes.
run12-16: sweet as hell. And seeing the reactions, I think this base is a succes. Ill be trying to improve it even further though

Two later runs:
G without green garrisons: Would you be shocked if I say that I didn't lose a single tower or hero? Well, yes I did make some adjustments. If you are curious, just take a peek at my base. Im high in arena if you need to find me
H fully loaded: OUCH, the thopters. I lost all my towers at the end of H2, but because of the beautiful design my heroes still had enough time to kill H3 and H4 before they could actually do something. H5 the dino happened.

Total outcome till now. 10/12 succeeded on G, 5/5 with limited Garrisons (legs only) on F. No real fails in the design yet though

You can call it Tanker

Let us know which one you can clear with this setup

i name it open book

'Walk of fame' literally lol. Let us know how you get on with this setup, in theory it indeed does sound awesome.