The new guild war feature is called Torch Battle. Torch battles are currently only available on the Facebook version and will be coming to the Android version soon (I hope). To access the torch battle, you need to click on your guild hall and then click the event button. Once in the event page, there are 2 tabs, one for the daily boss and one for torch battles.

Torch Battles are broken up into two parts. Seige and Defense. Both the Seige and Defense mode has a regeneration time of 1 hour per hero with a maximum of 10 seiges or defenses saved up. Every member of the guild will get 10 seiges and 10 defenses. 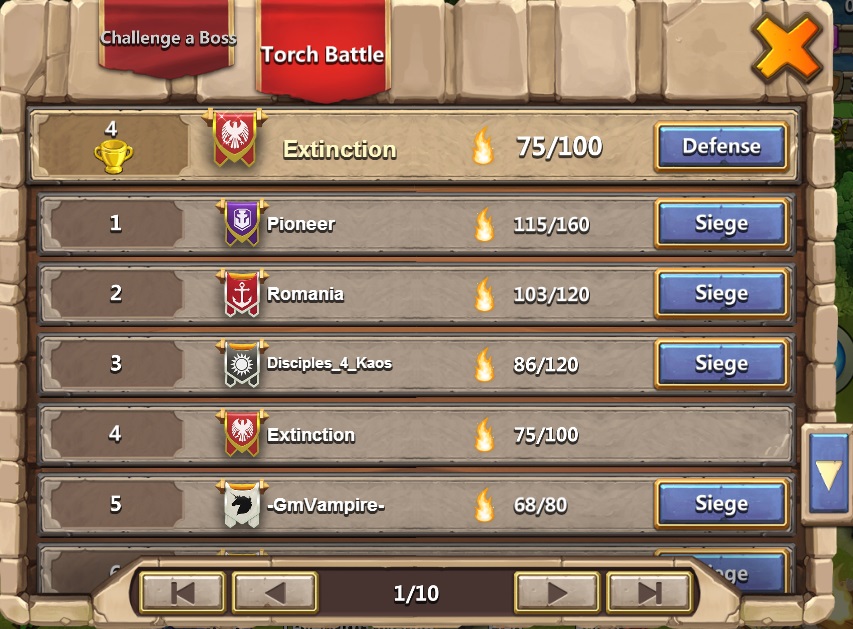 This mode is called Torch battles because we are all fighting amongst other guilds for torches. Currently, only the top 100 guilds are allowed to participate in torch battles, increasing the level of competition.  For every successful seige or defense your guild has, you gain one torch. For every failed seige or defense, your guild will lose one torch. The torch ranking system of a guild is a leaderboard of its own and it is speculated that the amount of torches your guild has will determine your rewards. Every guild member will receive a reward daily consisting of HB, Shards, and Gems.

Seige mode is when you select a guild to seige and choose a hero to attack that guild. After you place your hero, you cannot do anything else. The rest is left in the hands of the opposing guild to defend against your hero (seige).

As you can see below, that number 0 indicates I have no more seiges left and I have to wait 25 minutes for the next. 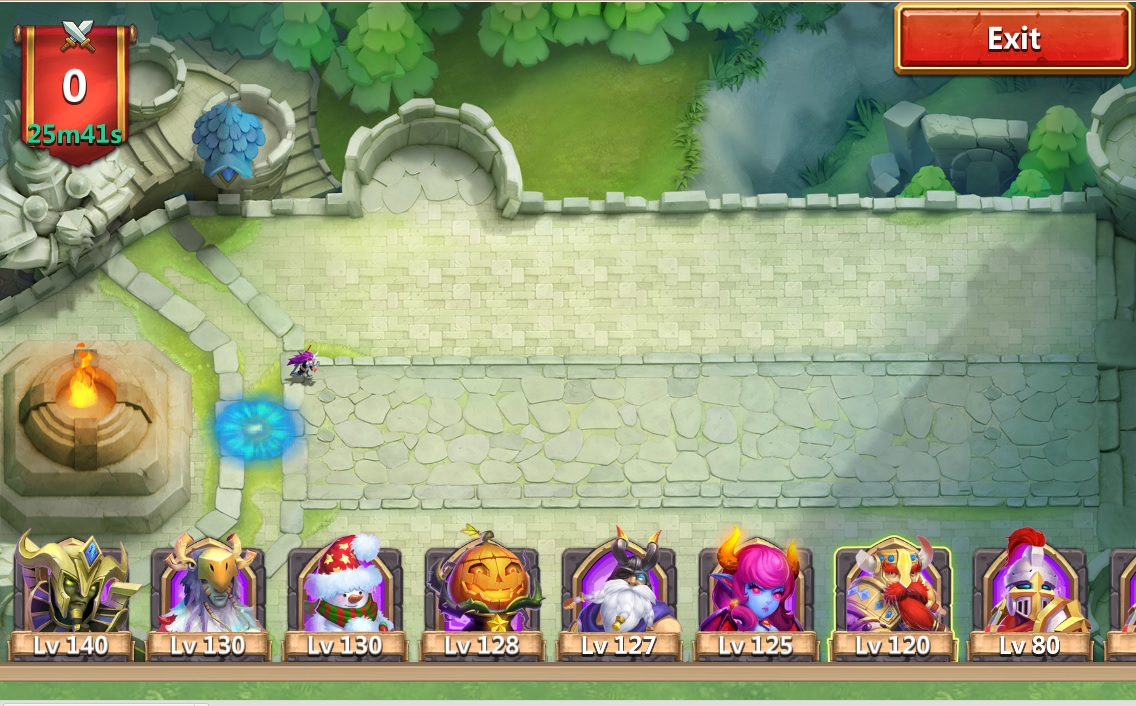 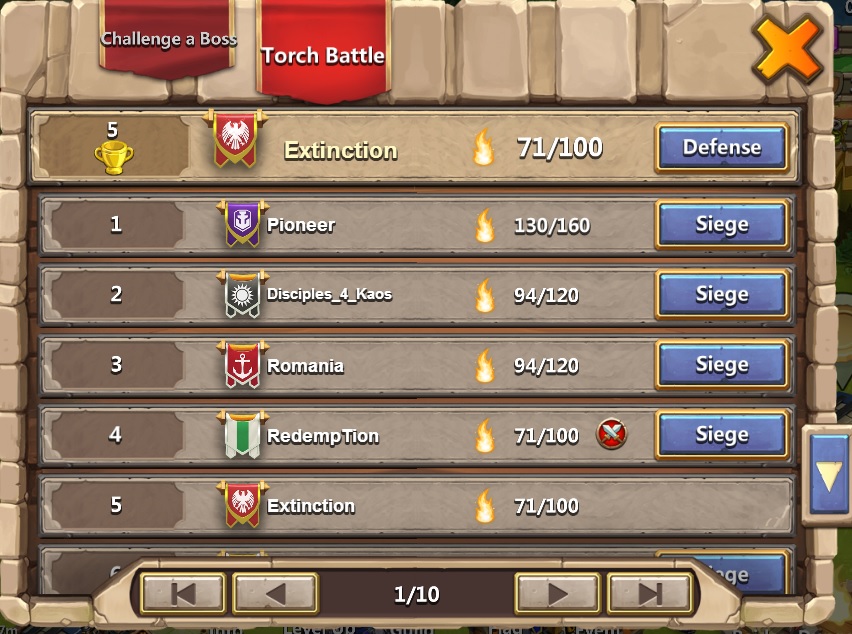 (No Defense screenshots yet because no one is seiging my guild)

Defense mode is the harder part of Torch Battles. While seiging is just simply sending your best heroes to attack another guild, defense is where the action occurs. In defense, I will get a list of all the heroes that other guilds have sent to seige my guild. Defense play is set up in a 1v1 match style where I can choose any single hero that I have to combat one of theirs. 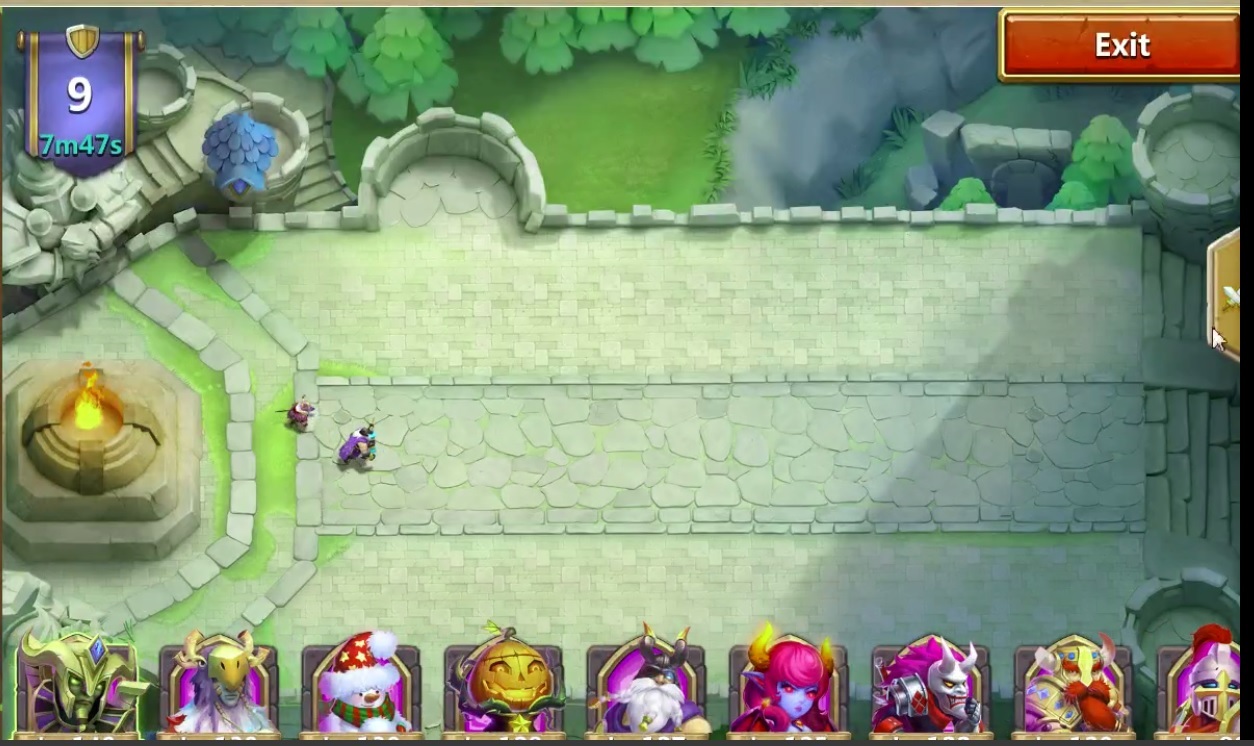 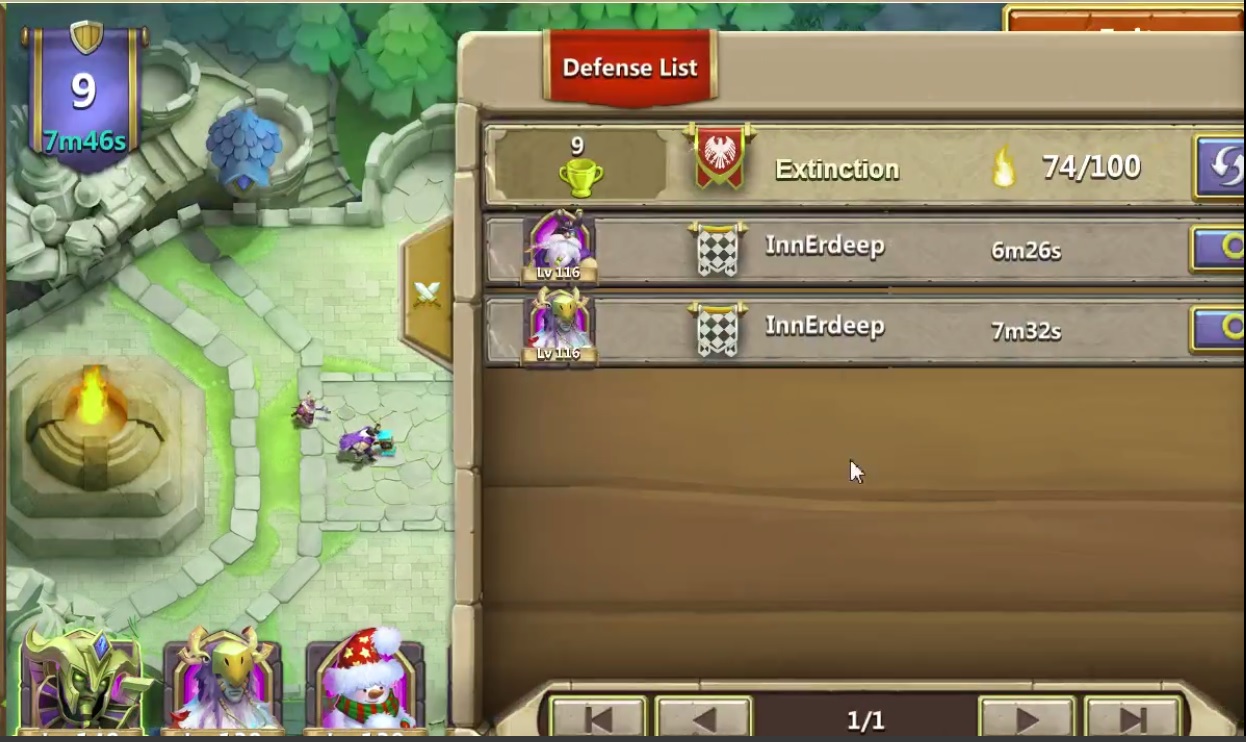 Again, I start off with 10 defense chances and 1v1 fight uses one chance. The seiging hero has 1 hour to seige. If I am able to beat that hero in a 1v1 within the hour, my guild will gain a torch. If I can't beat that hero, hopefully someone else in my guild can, or otherwise my guild will lose a torch. 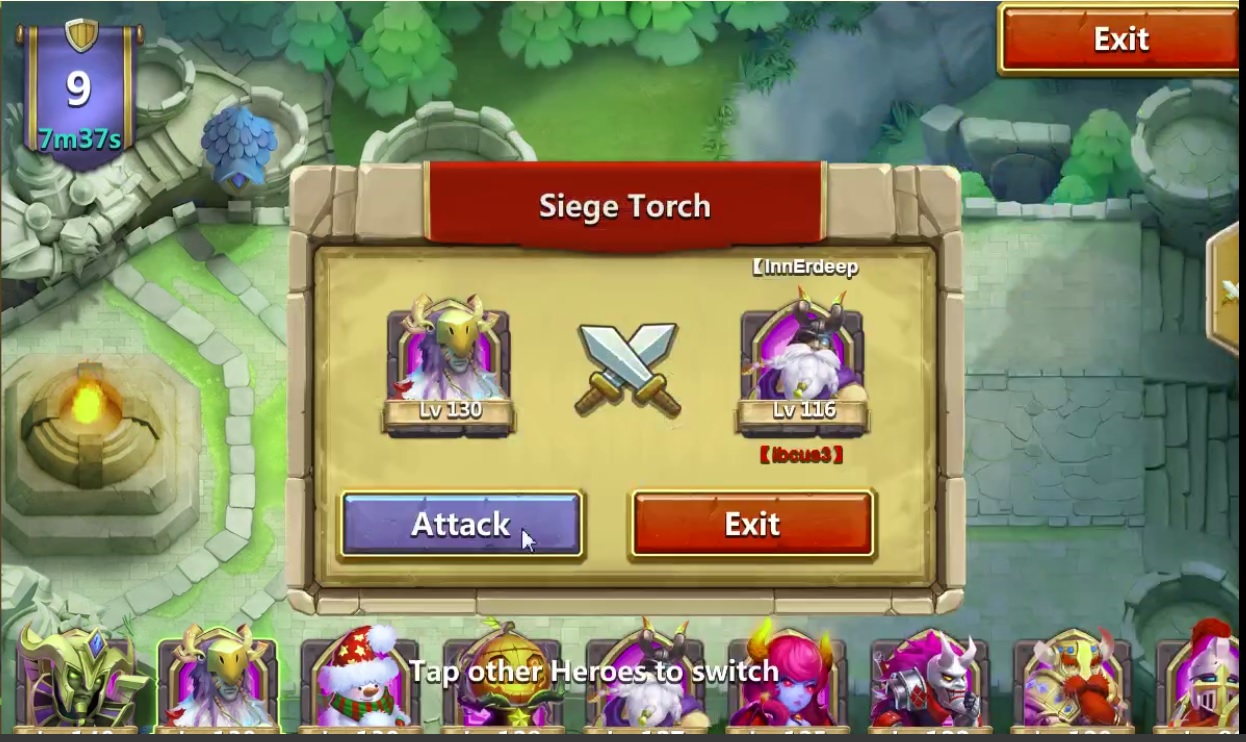 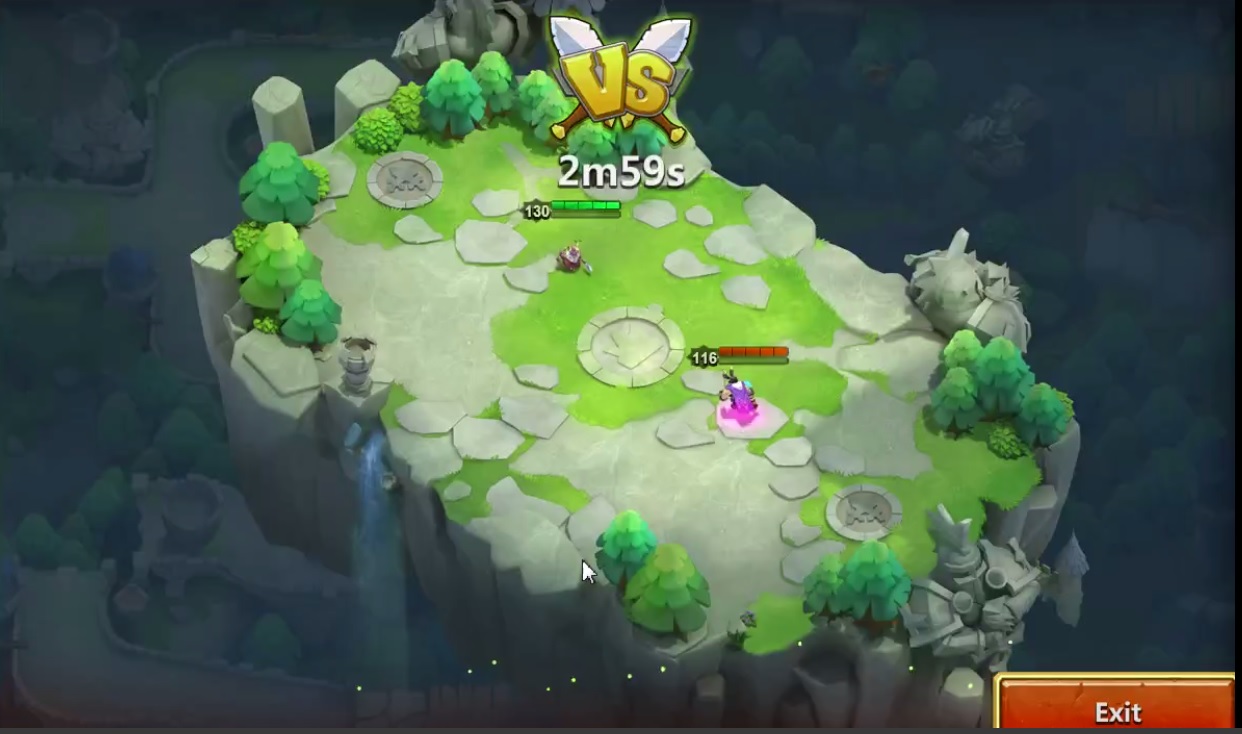 You will get awards daily based on the number of torches your guild has. Gems have a multiplier of 3, Shards by 5, and Honor Badges by 50.

This video includes one defense followed by a seige. Enjoy ~
http://youtu.be/barYIJu0tnI


Big Shoutout to Dalcowboiz for letting me use his account to record !!

Thank you for this information

Only top 100 guilds can do this? That's stupid. Most everyone in those top guilds are serious p2p. Also, what are the rewards for the

ButterBong Rated on 7/19/14 6:21:01 PM
They want to force guilds to spend money in order to play in guild wars. Simple igg logic of screwing over people.

As of right now, only the top 100 guilds in Facebook can participate. That number might scale upwards for Android version though, seeing as how Android has a much larger player count than Facebook.

Rewards are a combination of shards HB and gems. In the above video, I received 5kHB, 500 shards, and 300 gems for the daily reward.
Rate Delete Ratings

The guy below me likes to take it in the bum

Either create it for everyone to play or don't create it all. It's unfair that only the top 100 can play Guild Wars

ty plz give as more info when u can

How on earth do I post a picture directly? It keeps showing a stupid link instead of the actual pictures :S

How on earth do I post a picture directly? It keeps showing a stupid link instead of the actual pict ...