I've heard many rumors about Castle Clash dying and I would just like to put my point of view out there. You don't have to accept it or even read it, but its here in case you would like to know my logic behind the recent events. As you all may have heard, IGG has just released a sneak peak at the newest Dragon to be released to Castle Clash. This would bring in a huge profit, which seriously I doubt that IGG would abandon. What would make more sense to me is believing that they are just saving up all of the good deals for a huge New Years Day sale or a massive push for the new Dragon. Last year, IGG sold each copy of Dynamica for an absurd amount of money and required at least 18 copies to fully max out (3 for double evolution, 15 for relic 50). Many people immediately spent thousands of dollars trying to get him. I believe that this many be the case again and that they are just getting ready for one giant release update. So instead of worrying about the unlikelihood of IGG shutting Castle Clash down, I would start worrying about how much the new Dragon will affect the already unstable F2P vs P2P battle system like the last two did.

Thank you for your time,

This is probably the most likely case, and I think this could be what is going to happen, and for the dragon sneak peak, I think I could be a new dragon, or zephy, (I guess it's time to farm event coins quickly).

GreekMythology Rated on 12/31/20 4:10:09 PM
That is if they even let you get the dragon via event coins. They were nice with dynamica, they might not extend the same courtesy with the new dragon.

FirstLady Rated on 1/2/21 10:56:17 AM
It was discussed upon the release of Dynamica what was required to fully max out an Epic hero, however one does not have to fully max the hero out for it to be effective. As for this being a method to target people who can't afford to loose, everyone can afford to loose, some just have an issue tolerating loosing (bad choice of words) Anywho that is what marketing agents do, So in essence they are doing their job. Our jobs as consumers is to assume responsibility for our own finances and how we use them.

Btw that sneak peak that u assume as new dragon, it is not a new dragon. In fact, its the shadow of Zephyrica, the old-passed dragon

Captain_F2P Rated on 1/1/21 3:21:41 AM
Incase u guys wondering which sneak peek that we refers too, its the latest video about chrismas by IGG 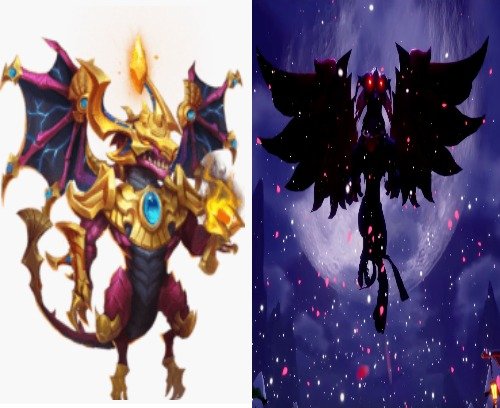 Cichociemiak Rated on 1/2/21 6:20:53 PM
Or it could be some kind of demon, which only looks like dragon from current perspective, but when it will be released it will not look like dragon at all.

i dont think this is zephy either

Main question is why IDD is still releasing new sneak peeks and bonuses if they want to shut down CC ?? Answer is simple - They don't have that kind of plans. I don't see any reason to talk about it any more indeed.
Maybe let's focus on that new hero/enemy which is visible on that video in post #6
Usually dragons are released during or after holidays. Right now we have beginning of year, and unless devs changed plans, this is not going to be dragon. Maybe more likely some kind of new demon, which is just looking like dragon. Or maybe something like Drax, which was indeed dragon warrior, but was not counting toward "event dragon".
Question is if devs are sticking to their planes with releasing one event dragon after half of year, or we will see either 2 event dragons now or event dragon after new year instead half of year.
One way or another all we can do now is wait till next update, which will take some time.

Signature
yo If you think a moderator should be demoted, please contact paparuazi or make a suggestion thread.
Return to thread list