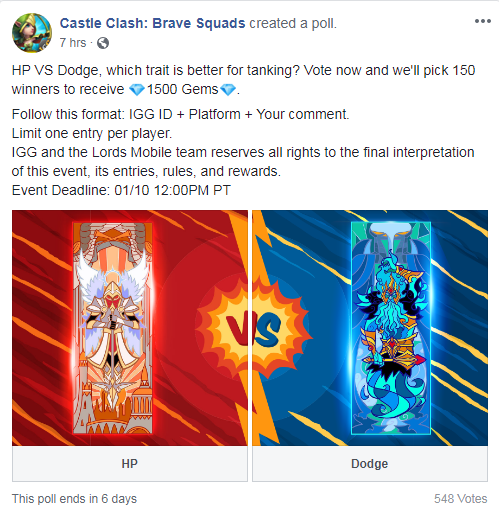 Hmmmm thats a interesting event for cc facebook to post. Im gonna say dodge wins the vote 89% of votes to 11% of votes for HP.

FirstLady Rated on 1/7/20 1:15:34 AM
Not all rewards interest ever player, some of the newbie and lower might accounts would appreciate gems in any amount.

Although i prefer Dodge also, there are few heroes which are better when they are being hit by enemy, cause they skill need it. Still it is not enough of them to keep HP win over Dodge imo. Thanks for info though.


So would a team of heavily orientated dodge players be able to immobilise a team of big HP, revive and anti-healing - healer type heroes in 3 minutes? Remember 3 minutes is the time limit in most game modes.

Likewise would a team of healers be able to hit enough times to take down dodge type heroes?

I think if you had a hero like Anubis and Trixie up front the other heroes might just be able to take down a dodge player quick enough to give the healers an advantage!!

FirstLady Rated on 1/10/20 4:32:59 PM
Not only that but you didn't follow the link to post in the right place, so deadline or not it would not have mattered.

Thank you. I will be more careful next time. Still newish to this forum. I dread to think how many times you must inform players they have posted incorrectly.