In the coming version we are going to have a new guild event named: Fortress Feud. This event is held once a month and guild leaders have to register their guilds to take part in it. In the event, several Fortresses will appear on the event map, and guilds will compete for control of Fortresses. Players earn points by occupying the Fortress, and rewards are awarded based on the Guild’s total points.

The following are more detailed informations, let's us know what you think in the comment below!

2. Four Guilds will form a Group and compete against each other.

4. Guilds compete for control of Fortresses in this event. Players can send Heroes to attack fortresses by making up to three teams of five Heroes.

5. Only two parties can battle at a Fortress. After a Fortress is occupied, it will be protected by Guild Guards. Guild members may also send their teams to guard a Fortress.

6. When battling at a fortress, all teams of players in both Guilds fight one-on-one. The winning Guild will battle with the next team with the current health and Energy they had at the end of the previous battle and any Heroes that died will still be dead.

7. Every 20 minutes,the points from occupying Fortresses will be totaled and all participating players' fallen Heroes will be revived.

8. Players earn points by killing enemy Heroes. They’ll also get a small amount of points if their own Heroes were killed.

9. Rewards are awarded based on the Guild's total points. All participating players from the same Guild will receive the same rewards. Players with 0 points will not get any rewards.

10. Please note that the screenshot is only for reference and the final rewards haven't been determined yet. 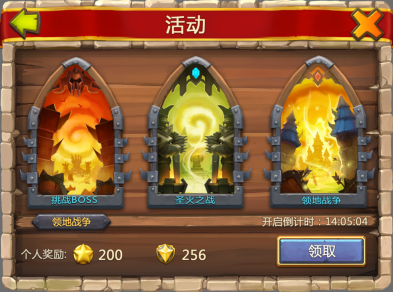 Jakestrap Rated on 4/5/16 3:19:56 AM
Only people that have spent 2+ years farming every day and spent 2700$ will have a chance of being in a guild that will see Fortress Feud or guild wars or torch battles... they are either the very rich or the igg employees that reserve that right. That's cool to have vip access but igg doesn't have to rub it in there fans faces... poor winners...

Jamjamjere Rated on 4/5/16 3:38:24 AM
Please just introduce something all players can enjoy and gain from. Am about sick of events my small guild can't participate in. Why am i forced to join top guilds to play an event! Why can't all players have fun and enjoy. Do something like raids where you can be put against people.of equal strength. Not a guild rank.

A bit confusing, but sounds interesting

Huh? I heard more fame?Count me in.

XAtomotAx Rated on 4/4/16 1:12:31 AM
Actually it says the rewards aren't determined yet and it'll prob be more fame.. It is only once a month after all and hb and merits only is too lame for that.. And we all need a lot more fame..

Tommy69999 Rated on 4/4/16 9:13:09 PM
I think if it's every month I think hb and maybe gems should be a reward.. Like some you tubers have said we all can earn shards and fame so easily now maybe adding gems should make more people particapate more just a a idea:)

So like an advanced form of torch battle kinda? Gotta admit...after they did guild wars like expiditon I can see them doing this

Is that the reward for playing it once a month !!!

This one sounds familliar to what i suggested through live support

And thia ia what i suggested

1) how to participate:the first stage is participation only guild on top 3000 rank in might can participate.

2) battle on the map: the second stage of this mode is battles between guilds on the map.Each group of 10 guilds gets it's own map of 100x100 tiles in size(tiles like in lost realm) players of all guild are placed on the map randomly. In this case 1-5 of guild members on the same starting tiles.after being placed on the map guild members start to fight for territories.the guild that hold most outposts by the end win.

3) map desription: map is a huge area of 100x100 tiles. It is divided into sectors of 20x20 tiles. There is an outpost in the center of each sector. Movement in the map are west,east,south,north. You cant move horizontally.players need to be on the tiles to attack the base in the tiles.

4) starting tiles: its the tiles on which 1-5 player of a guild are placed.it is not own by any guild and it cant be capture nor can it be visited.

5) tiles on map: in the tiles are bases that originally belong to no one.there are tiles of 5 difficulty on each map.players can get items on some tiles which can be used during this event.players capture tiles on their way to an outpost unless the tiles are already captured by other guild members.to capture a tile a player must destroy the base in the tiles with at least 1 flame. When a tile is captured it became the property of the guild.the base that was in the tiles before it was captured is replaced with a replica base of the player that captured it.Players can move on the tiles that belong to their guild or allies, 1minute per tile.

6) outpost: these are the most fortified bases in the map. They occupy 2x2 tiles on the map. To win the guilds must capture as many outpost as it can and to hold it until the end. To capture an outpost the player must win by at least 2 flame. When an outpost is captured it became the property of the guild, as well as the tiles around the outpost within the radius of 2 tiles. The base on the outpost remain the same as before it was captured, while the tiles within radius of 2 tiles are replaced with the base of the player that captured the outpost.players cannot move on an outpost.

10) items during the event: if this event is implemented, i suggest that igg make a items storage where we can use it during this event. Items are gained on the map. The items are put on some tiles, to get the items player must move,attack and win the tile to get the items or if you captured an outpost and theres items in the radius player can pick it up by moving to the tiles. If player do not have items storage building or there is not enough space the items wont be picked up it will stay on the tiles. Items can be use directly on the map,on tiles and in battle. Items from previous event cannot be brought to the next event.

12) penalties and attack enemy player: if player attack a tiles or an outpost and lose, he/she gets a penalty on the tiles that player attack by 1 hour for tiles and 5 hours for outpost. Player can attack enemy player, to do this player needs to be on the same tile as player's enemy is. If the player that attacked loses, the player will stay at the location and unable to move for 1 hour. If the player that defends lose, the player will be sent to the nearest starting tiles and the penalty is unable to move for 1 hour. Penalty can be speed up with gems for 3 times only

Evilday Rated on 3/24/16 2:21:39 AM
Yout lack of self-development is astounding ohisthatright