I ask this question on wegamer and ppl said it's too op.
So what do you think about new talent / crest  ( Reborn ) it makes the hero revive twice 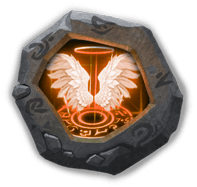 seems a bit boring because its just a more powerful current talent, like wargod x2

something completely different would be more interesting

Don't add new talents or crests I say.  We don't need to have to consider replacing all our 8/8 talents because some new one comes out that we also have to roll gems for...

I think the idea is good, but I don't like how it is straight up better than Revive.

It would essentially make Revive pointless, and losing a talent for a new talent isn't a step forward IMO.

Only way I see it being viable is if they add more levels or "evo" to current talents.

I mean, you could have it so that even at 8/8 the new talent maxes out at 50% hp on revive, so you get a choice of two revives at half health or one revive at full health. That way it at least makes it more of a choice in function, rather than one simply being better than the other.

But I think the evo talents idea could be more fun. It'd be a way to add new/upgraded talents without having to replace things people have put a lot of effort and/or resources into.

Also, I must say that I really like that crest icon. Very nice. Would cheerfully vote to replace the current revive icons with that one.

if igg really want to further break the game then they just have to introduce corrode and heaven's wrath crest.